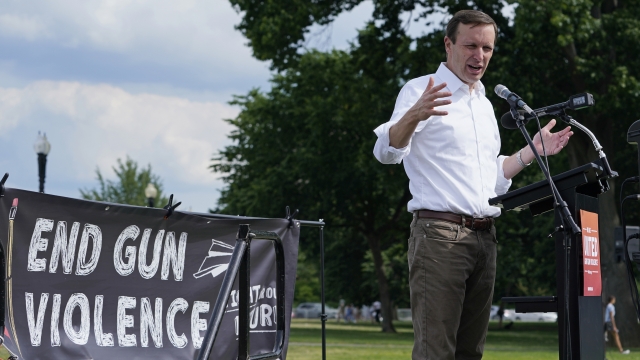 On the heels of March For Our Lives rallies across the nation this weekend, a small bipartisan group of senators announced Sunday a new agreement on gun control in America.

It includes mental health resources and school security provisions but would not raise the minimum age of semi-automatic firearm purchases from 18 to 21, something many congressional Democrats have pushed for.

Critically, the legislation also includes a so-called "red flag" provision, intended to keep guns out of the hands of criminals and those who pose a threat to themselves, or others.

The framework agreement comes just weeks after the horrific, racist attack at a supermarket in Buffalo, New York, and the massacre of 19 children and two teachers at a grade school in Uvalde, Texas. And as activists apply mounting pressure to lawmakers, the four main senate negotiators spent all weekend in talks, working to hammer out the final details.

"I think that we can put together a package that will get more than 10 Republican votes, and again, the reason for that, is the demand from their constituents,” said Sen. Chris Murphy.

Any new legislation would need at least 60 votes to pass in the Senate, but just a simple majority in the House.

President Biden calling the framework “an important step in the right direction.”

In a statement President Biden said, “I want to thank senator Chris Murphy and the bipartisan group for their gun safety proposal-- It doesn't include everything I think is needed, but it reflects important steps in the right direction.” Adding, "there is no excuse for delay-- and no reason why the deal should not quickly move through the senate and the house."

Senate leaders also reacting. Minority Leader Mitch McConnell issued a statement in support of the agreement, saying he was "Glad Senators Cornyn and Murphy are continuing to make headway in their discussions."

Senate Majority Leader Shuck Schumer said he would put a bill on the floor "as soon as possible."

Speaker Nancy Pelosi adding, in part “While more is needed, this package will take steps to save lives.”

The measure is not expected to pass the senate amid widespread GOP opposition to stricter gun control.