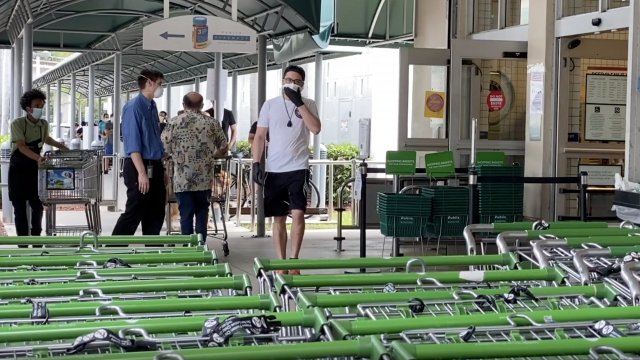 Grocery store workers are still struggling to get masks and other personal protective equipment as they work to keep food flowing to kitchen tables during the pandemic.

More than 1,500 hundred food workers have now tested positive for the novel coronavirus, according to the United Food and Commercial Workers union.

Four employees at Kroger stores in the Detroit are among grocery store workers who have died from the virus.

Kroger, the nation’s largest grocer, said it was still waiting on more shipments of masks as of last week.

“Part of the problem here is this nationwide shortage of protective equipment,” said Jonathan Williams, of the UFCW Local 400, representing workers in and around Washington, D.C.

Retailers contacted by Newsy said they are suffering from the same shortage of protective supplies affecting health care workers.

Harris Teeter said its first shipment of masks arrived on Friday, though more orders have yet to ship out.

Wegmans said it already had enough masks for employees.

Only Trader Joe's mentioned trying to get more than one mask per associate, now working to get at least two.

According to the Washington Post, in the past month there has been a 60 percent increase in job postings for grocery clerks.

That might put them at the front of the line to get much more protective equipment when it becomes available.

The group has also asked the CDC to make masks a requirement for grocery store staff.

The retailers told Newsy when masks are not available, employees can bring or make their own.