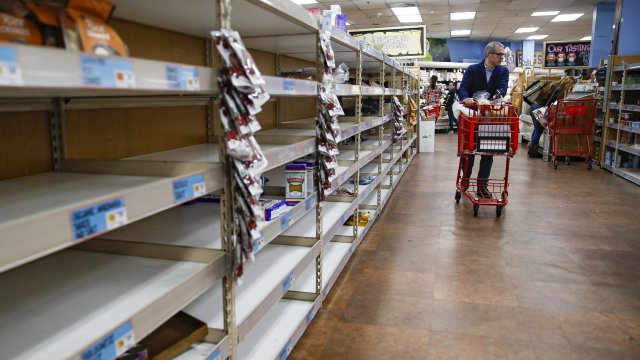 SMS
Grocery Stores Starting to Stockpile for a Second Coronavirus Surge
By Alex Arger
By Alex Arger
September 27, 2020
Stores are now changing their focus from having weeks of product on hand to having months of supplies.
SHOW TRANSCRIPT

Grocers are starting to stockpile in preparation for a second coronavirus surge, changing their focus from having weeks of supplies on hand ...to *months of supplies in stores.

More Americans have been buying groceries and eating at home since the pandemic began, and the higher demand has created higher prices from stores and manufacturers, who are offering fewer deals and discounts.

But leaders in the food industry are trying to stay ahead of the curve by speeding up production of their most popular items, especially for the holiday season.

Meanwhile, Associated Food Stores is upping its inventory of cleaning and sanitizing products. Paper towel shortages are still an issue in local stores, and at Amazon and Costco. This is partly because some customers are hoarding them, and others are using more to clean during the pandemic.

Clorox, which holds almost half the disinfectant wipe market, said it'll struggle to meet demand into next year even though it has ramped up production.

Some experts warn another surge could come soon, as daily reported cases are rising in states that were seeing downturns in the summer.