Greta Thunberg Named Time's Person Of The Year For 2019 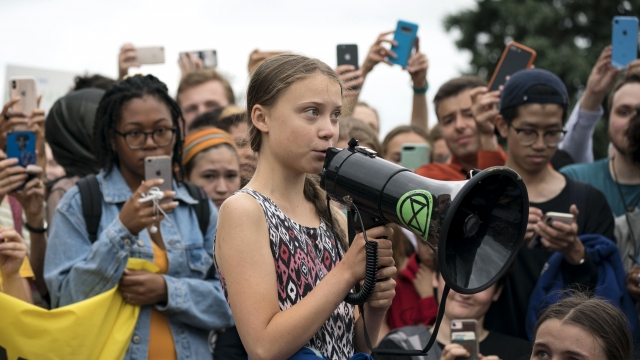 SMS
Greta Thunberg Named Time's Person Of The Year For 2019
By Alec Larson
By Alec Larson
December 11, 2019
The climate change activist was described by Time's editor-in-chief as "​the biggest voice on the biggest issue facing the planet this year."
SHOW TRANSCRIPT

TIME Magazine has named 16-year-old Swedish climate activist Greta Thunberg as its person of the year for 2019.

Thunberg is the magazine's youngest choice ever for Person of the Year. Her selection was announced on the "TODAY" show Wednesday, with TIME's editor-in-chief calling her, "the biggest voice on the biggest issue facing the planet this year."

Thunberg's rise to prominence began in August 2018, when she started skipping school to protest climate change outside of the Swedish Parliament in Stockholm. Her protest soon gained international recognition as Thunberg took her activism to the world stage.

Her perhaps most notable appearance came at the U.N. Climate Action Summit in September, when she delivered a withering takedown of global leaders over their lack of action on the climate crisis.

"People are suffering. People are dying. Entire ecosystems are collapsing. We are in the beginning of a mass extinction, and all you can talk about is money and fairy tales of eternal economic growth. How dare you!" Thunberg said.

Thunberg, who has Asperger's Syndrome, also began the "Fridays for Future" movement and helped inspire nearly 4 million to take part in a global climate strike on September 20. TIME called it the largest climate demonstration in human history.