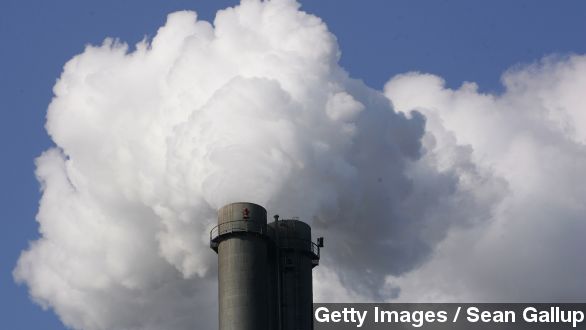 By Jay Strubberg
September 9, 2014
A new report shows greenhouse gases are filling the Earth's atmosphere at record rates. The WMO Secretary General says, "We are running out of time."
SHOW TRANSCRIPT

Fueled heavily by a huge upswing in carbon dioxide levels, a new report says greenhouse gases in the atmosphere jumped to record heights in 2013.

According to the World Meteorological Organization, greenhouse gases like carbon dioxide, methane and nitrous oxide surged to their highest year-over-year concentration in 30 years. (Video via BBC)

In particular, CO2 levels in the atmosphere have swelled substantially since before the industrial era.

WMO's Secretary General urged leaders to take action fast. “We know without any doubt that our climate is changing and our weather is becoming more extreme due to human activities. ... We must reverse this trend by cutting emissions of CO2 and other greenhouse gases across the board. We are running out of time.”

As expected, the usual skeptics were out to try and discredit some of the findings.

LIZ MCDONALD VIA FOX NEWS: "What makes a trend? Is it 19 years of cooling? Is it 20 years? ... I don't think anybody is in agreement right now about where global warming and where global cooling is."

That's referring to a United Nations report from last year that says the Earth has actually hit a cooling period as of late, and it appears the jury is still out on what exactly is causing it.

Regardless, 97 percent of the scientific community still believes human activity has affected the ebb and flow of the climate in some way.

JIM EMBERGER, SPOKESMAN OF NEW BRUNSWICK ANTI SHALE GAS ALLIANCE VIA CBC: "Intergovernmental Panel on Climate Change says that we have about five to fifteen years to get this right or basically we're facing a calamity, a disaster."

Tuesday's WMO report says greenhouse gases aren't the only problem. It also warns against a thing called ocean acidification — basically, those emissions that find their way into ocean waters.

It says a portion of carbon dioxide emissions end up essentially as ocean pollutants — which can have a number of negative affects on aquatic wildlife. (Video via National Geographic)

President Obama and other world leaders are expected to negotiate a new climate initiative to replace the Kyoto protocol at a summit in Paris next year.