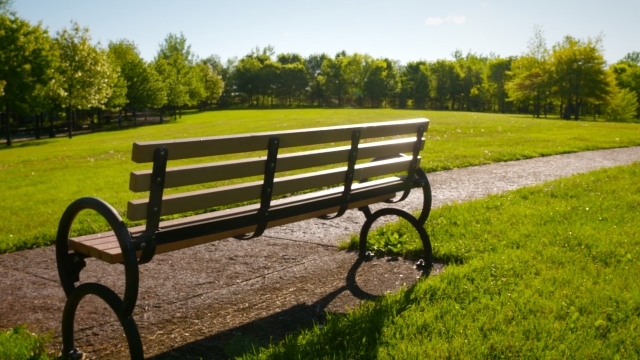 Green infrastructure uses natural elements to manage weather effects like rain runoff. But it improves other aspects of communities, too.

More and more money is being spent on green space in cities, but it’s for more than just parks or water management. The benefits green infrastructure brings can elevate whole communities.

Green infrastructure uses plants, soil, and natural rocks to manage the elements — like runoff when it rains. According to the Environmental Protection Agency, it’s cheaper, more durable, and less environmentally harmful than grey infrastructure -- pipes, ditches, that sort of thing. Experts say it does more for the community, too.

"Green infrastructure sometimes get this bad rap about it because people so associate it simply with park development. But it's not. I mean, it's literally a way to manage storm water, clean the air, provide urban heat island relief, mitigation," Majora Carter told Newsy.

Carter started a nonprofit and has won awards for pioneering development with the local community in mind. Her latest project is redeveloping three and a half blocks in northeast Indianapolis. At Smart Cities in New York, Carter told Newsy how green infrastructure is critical for under served communities.

Green infrastructure can also save money. A 2018 report from Capital E, a venture capital firm in the clean energy sector, found “smart surface technologies” like roofs covered with plants could lower cooling bills and even make a city as a whole more temperate, which helps tourism. The firm projected these improvements could net roughly half a trillion dollars in combined savings nationwide.

Take the South Bronx Greenway, for example. The first part of this network of parks and pathways opened in 2008 and improvements have continued since.The nonprofit Sustainable South Bronx launched solar installation and green infrastructure training in the neighborhood at the same time.

"If we created the kind of place that people felt that they didn't have to move out of in order to live in a better one, Then you are also responding to what are the kind of workforce needs, what are the economic growth trends, and then you want to prepare your people to participate in that," Carter said.

But according to the Clean Water America Alliance, some of the biggest challenges to green infrastructure include insufficient state or local rules, and inadequate money or oversight to cover the costs of installation, maintenance, or job training.

"75 percent of American infrastructure is delivered by cities and state governments not by the federal government. If you get the critical infrastructure like water and sewer infrastructure, It's more like 98 percent," Steve Benjamin, Mayor of Columbia, South Carolina told Newsy. "As we continue to deal with these challenging wet weather events and climate change, the severity and frequency of them, it's essential that local governments. become very active in delivering infrastructure."

Benjamin’s goal is to have Columbia completely powered by clean renewable energy by 2035. In April, he testified to Congress, asking for more funding to states in the form of Energy Efficiency and Conservation Block Grants. He also asked for cuts to national greenhouse gas emissions by 2030, and to update the nation’s electric utility grids. He says it could help offset the local costs municipalities and states take on when they build green infrastructure.

Los Angeles is taking its own approach to the Green New Deal.