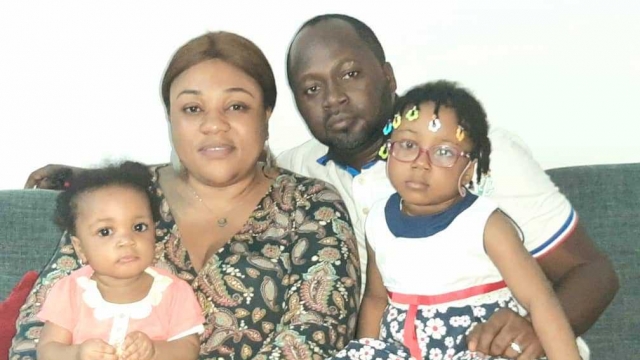 SMS
Thousands Of Green Card Lottery Winners Out Of Luck Due To Trump's Ban
By Ben Schamisso
By Ben Schamisso
July 23, 2020
Winners worldwide can't use their once-in-a-lifetime opportunities to immigrate to the U.S. because of COVID delays and President Trump's visa ban.
SHOW TRANSCRIPT

Every year, millions of people around the world apply for a rare shot at a U.S. green card through the annual diversity visa lottery. This year, thousands of winners — selected randomly by the U.S. government — are out of luck.

"When I realized that we were not going to go to the United States, I felt so bad. We all felt bad," said Ijeoma "Golden" Kouadio.

Kouadio lives in Ivory Coast with her husband and two daughters. She has applied for the visa lottery many times in recent years, hoping for a peaceful life in the U.S. far away from her country's political instability.

In January, her family got selected.

"I was so happy and I was pregnant. So the first thing I did was I rubbed my tummy, my belly, and then I said, 'This baby gave me good luck,'" Kouadio said.

Steps away from achieving her dream of becoming a permanent resident in the U.S., Kouadio submitted the required paperwork and paid all the fees. The local U.S. Embassy scheduled her interview for late April.

But then it was canceled due to the coronavirus.

Soon after, President Donald Trump banned the issuance of most visas for people abroad for the rest of the year — and Kouadio's dreams vanished.

"We stopped a lot of things and we began to live our life as if we're going to leave very soon to the United States. I've been cut away from that chance. So, it's so painful. It's wrong," said Kouadio.

The president says the visa freeze is necessary to free up jobs for millions of Americans who are unemployed due to the pandemic.

"It would be wrong and unjust for Americans laid off by the virus to be replaced with new immigrant labor flown in from abroad," President Trump said in April.

In a lawsuit filed last week on behalf of Kouadio and other people affected by the ban, lawyers say the freeze "endangers the country’s economy — to the ultimate detriment of U.S. workers."

"Immigrants who come in, what do they do? They buy goods. They buy services. And that helps stimulate our economy, particularly during times of the downturn," said Karen Tumlin, one of the lawsuit's litigators.

Tumlin is asking a federal judge to overturn the ban before the deadline passes for lottery winners to obtain their visas.

"It's estimated that you can apply every year, it will take you 276 years to win. And then the way the system works is once you win, if you can't get a visa in hand by October the 1st, you're out of luck," Tumlin said.

Congress created the diversity visa program in 1990 to diversify the background of U.S. immigrants. Since then, about 50,000 visas have been issued annually to people from underrepresented countries.

But this year, about 42,000 lottery winners were not able to complete their consular process by the time President Trump issued the visa freeze.

Long before the pandemic, the president tried to eliminate the program, saying the U.S. should select immigrants based on their skills only.