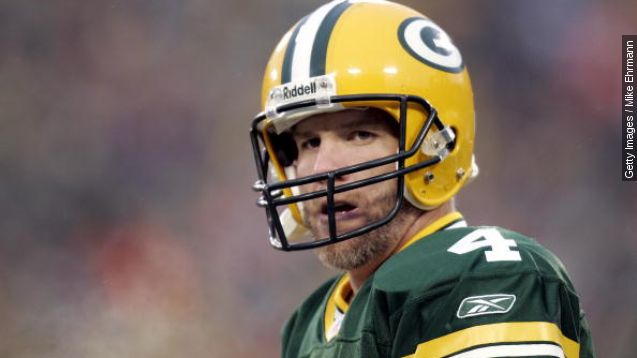 SMS
Green Bay Forgives; Favre Inducted Into Packers Hall Of Fame
By Matt Moreno
By Matt Moreno
July 19, 2015
Quarterback Brett Favre was inducted into the Packers Hall of Fame in front of a sold-out crowd at Lambeau Field on Saturday.
SHOW TRANSCRIPT

It was a sold out crowd at Lambeau Field on Saturday and no, it wasn't for a football game in July.

"All I can say is wow. Wow. This is absolutely amazing," Favre told Packers fans.

More than 67,000 fans gathered in Green Bay to welcome former quarterback Brett Favre into the Packers Hall of Fame.

Not only was the sheer size of the crowd a surprise, but so was the overwhelmingly positive reception Favre received after his complex exit from the team.

Favre's exit pretty much all started when the Packers drafted Aaron Rodgers in 2005.

"My contract doesn't say I have to get Aaron Rodgers ready to play. Hopefully, he watches me and gets something from that," Favre said in a press conference.

Favre retired following the 2007 season, leaving Rodgers to become the team's new QB. However, Favre wavered in his commitment to retirement and asked to rejoin the team weeks later. (Video via WLUK)

After mud slinging from both sides, Favre was eventually traded to the New York Jets for the 2008 season and later joined the Minnesota Vikings — an NFC North rival of the Packers — for 2009 and 2010. He retired for good in 2011.

Despite how badly it hurt some fans seeing Favre wear purple after 16 very successful years in Green Bay, it appears Packers fans are willing to look past that.

"I think a lot of people here in Green Bay will forgive, but they might not ever forget. I haven't worn this jersey in over 2,000 days," Packers fan Corey Fritsch told WLUK.

Former Green Bay Packers president Bob Harlan told CBS Sports that it wasn't just what Favre did on the field that made him such a fan favorite, but his off-the-field personality too. (Video via Milwaukee Journal Sentinel)

I think Green Bay, Wisconsin was built for Brett Favre — the small town guy, the blue collar guy, loved country music, loved to mingle with the fans, have a few beers, have some pizza. There's nothing pretentious about him," Harlan said.

Favre became the first Packer to be inducted into the team's Hall of Fame and have his number retired on the same day.