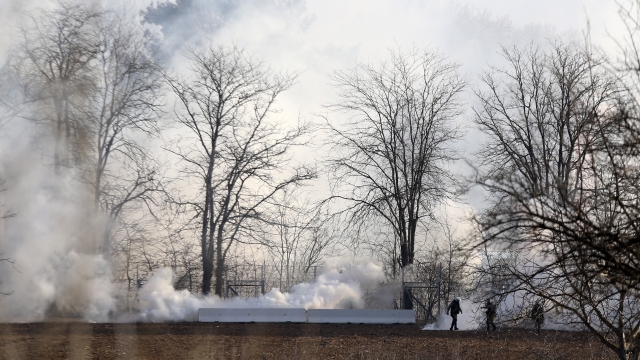 Greek police fired tear gas at migrants who were trying to enter the country through its border with Turkey Friday.

According to the Associated Press, Turkish police on the other side of the border responded with tear gas of their own.

Turkish officials indicated late last month that the country would no longer block a migrant route into Europe, causing scores of people to flee farther north. But the influx of migrants —some of whom are fleeing the Syrian regime and its Russian backers — resulted in both Greece and Bulgaria shutting down their borders.

Now thousands of migrants are setting up makeshift camps on the Turkish side of the border.

To help counter the pushback from Greek border guards, Turkey said it's sending 1,000 of its police officers to the area.

The Greek government said Thursday that it had driven back roughly 35,000 migrants along the border since Saturday and arrested more than 240 others. Officials say they plan to deport all migrants who entered the country illegally after March 1.

Additional reporting from Costas Kantouris of the Associated Press.