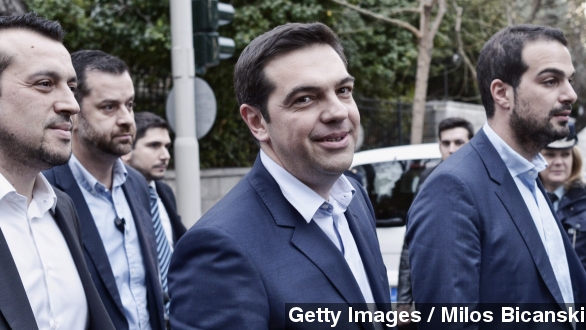 Greece's new leftist government has doubled down on their promise to radically restructure their debt burden.

Finance Minister Yanis Varoufakis told reporters, "But with the troika, which aims at implementing a program which we consider anti-European, with this committee, which according to the European Parliament is poorly structured, we do not aim to work with."

The country's new finance minister vowed Friday the government would not negotiate with the coalition of lenders, known as the troika, which currently manages Greece's debt. He also said Greece would not seek an extension of their current bailout plan.

This is a pretty bold move, considering Greece is running up against a troika deadline. The lenders were supposed to review Greece's finances by the end of February, which would unlock €7 billion of bailout money.

Greece desperately needs that money to meet its previous debt commitments; however, that pile of cash is locked behind the strict austerity measures which have crippled Greece's economy for years. (Video via CBS)

Instead of accepting more austerity, Greece wants to negotiate directly with each of Greece's lenders for a new deal on its loans — preferably one that includes a massive debt write-off and greater risk-sharing provisions.

The country's new prime minister, Alexis Tsipras, and his party Syriza were elected last week on their pledge to roll back austerity and restructure Greece's debt. Tsipras has already started reversing some of the country's austerity policies.

But Tsipras can't push against the debtors too far. Without their bailout money, Greece risks a massive default and a possible exit from the Euro — something neither side wants to see happen.