Greece's New Prime Minister Has His Work Cut Out For Him 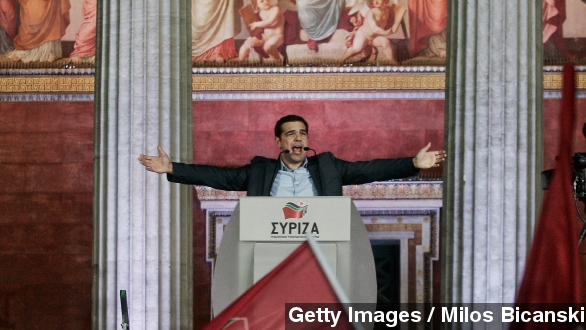 Alexis Tsipras is the next prime minister of Greece, his party Syriza has won 149 of the 300 seats in Greek Parliament and nobody's exactly sure what's going to happen next.

Tsipras and left-wing Syriza have formed a coalition with the right-wing Independent Greeks party, which won 13 seats Sunday. The thing they have in common? They're both anti-austerity. (Video via Euronews)

Syriza rode that anti-austerity sentiment to victory, but it'll now have to decide whether to follow through on promises to roll back the policies, which have raised taxes and cut government spending. That could be tricky. (Video via SYRIZA European Parliament)

That's because Greece would have to once again renegotiate the terms of its bailout, which is a tricky enough task without the goal of reducing the austerity measures that came with the bailout in the first place.

As Foreign Affairs lays out, that leaves Tsipras, as head of Syriza and, by extension, Greece, with a difficult choice — renege on promises of rolling back austerity or turn his back on the country's lenders and possibly leave the EU.

"Greek voters, despite their economic suffering, still support the country’s membership in the euro by a large margin and would steeply penalize any government that takes the country in that direction."

The Financial Times' John Authers told PBS, "Volatility will increase, this will worry people, until such a point as negotiations emphatically break down or the Greeks actually go through with a default."

There really isn't any easy solution, and Tsipras has his work cut out for him, especially considering he's not the first politician in Greece to capitalize on anti-austerity sentiment.

Antonis Samaras, the man Tsipras is succeeding as prime minister, also campaigned on a policy of cutting back austerity measures. He wasn't able to follow through on those promises, which ultimately lead to Sunday's elections. (Video via Al Jazeera)