Greece's Finance Minister Will Be Missed (By The Media) 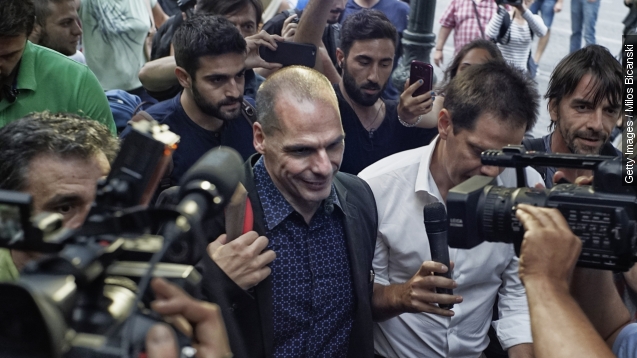 A moment of silence for Yanis Varoufakis.

No, the Greek finance minister hasn't died, but he has stepped down, which means the world of European debt just got a little less colorful. (Video via Channel 4)

He rode a motorcycle, he talked like a Bond villain and he was always very candid when it came to Greece's dealings with its creditors. (Video via Star TV, United Artists / 'Goldfinger')

"My God to have a destroyed economy, which is borrowing from the Europeans' stability mechanism to pay to the European Central Bank is not just idiotic, but it's the epitome of misanthropy," Varoufakis said about Greece's default. (Video via Skripta TV)

Which stood in sharp contrast to most economic officials, who usually sound like this:

But it was Varoufakis' outspoken, combative nature that led to his decision to step down. He explained on his blog, "I was made aware of a certain preference by some Eurogroup participants, and assorted ‘partners’, for my… ‘absence’ from its meetings ..." (Video via WDR)

Still Varoufakis leaves on a personal high note — the 'no' vote he pushed for in the country's European referendum won by a comfortable margin, and before (we assume) riding his bike into the sunset, he said, "I shall wear the creditors’ loathing with pride." (Video via CBS, Skai TV)

This video includes images from Getty Images and music from Ketsa / CC BY NC ND 4.0)