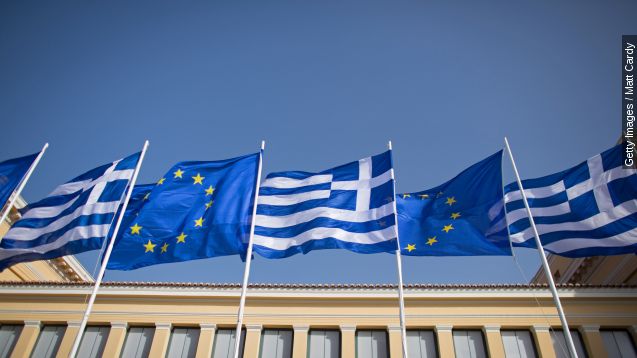 The economic fate of Greece continues to hang in the balance.

The EU cancelled an emergency summit Sunday, though talks among eurozone leaders regarding Greece continued. The talks are seen as Greece's last chance to provide a list of pension cuts and other economic reforms that European leaders are demanding in exchange for debt relief and a bailout of the nation's crippled financial sector.

The crisis has created chaos in Greece, with ATMs being forced to close and basic supplies becoming harder to find as capital flees the country. (Video via CBS)

"In a diminishing economy, perhaps even a  diminishing country, even the newspaper is getting smaller. There's an apology on the editorial page here that they're running out of paper to print it on," said Jonah Hull, a reporter for Al Jazeera.

The last-ditch talks come a week after the Greek people rejected the EU's last offer by a 23-point margin in a vote that cast serious doubt on Greece's ability to keep the euro. (Video via VICE News)

"We were hungry before, and now we'll stay hungry, but at least we stood up today to Angela Merkel," said a Greek "no" voter.

But in the runup to Sunday's talks, the Greek government offered terms remarkably similar to the ones rejected by its voters — a sign that while Greeks want to stick it to Angela Merkel, their leaders want to remain part of the eurozone even more.

"Do people, particularly the 'no' voters, do they feel feel betrayed by this offer? Do they feel that, you know, Tsipras just caved?" asked Joe Weisenthal of Bloomberg.

"Yes, a lot of them do," answered Nick Malkoutzis.

So, bad news for democracy but great news for creditors: Greece's new terms sent European markets soaring, with many anticipating a deal that basically gives Europe what it wanted before the vote.