Greece Begins Sending Migrants Back To Turkey Under Controversial Deal 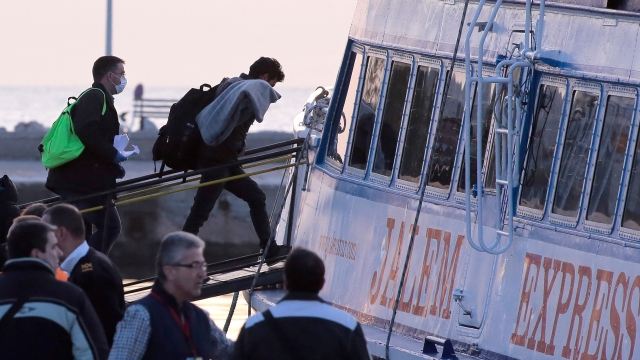 SMS
Greece Begins Sending Migrants Back To Turkey Under Controversial Deal
By Ryan Biek
By Ryan Biek
April 4, 2016
Over 200 migrants were deported to Turkey on Monday morning as part of the country's new deal with the European Union.
SHOW TRANSCRIPT

Greece has deported its first group of migrants back to Turkey under a controversial new EU plan.

Many of the migrants in Greece crossed into Europe through Turkey via the so-called Mediterranean route. Over 200 of those migrants were sent back to Turkey on Monday morning.

But none of those migrants had claimed refugee status. Under the new deal, illegal immigrants who do not apply for asylum in Greece, or have their application rejected, will be deported.

Officials say two Syrians returned to Turkey voluntarily. The rest of those deported were originally from Pakistan, Sri Lanka, Bangladesh, India and Afghanistan.

The EU's plan will eventually exchange one Syrian refugee who has legally sought asylum in Greece for each Syrian sent back to Turkey. In return, Turkey is receiving over $6 billion to help refugees within its borders.

In a little over a year, about 1 million refugees have gone from Turkey to Greece.

Some have previously argued Greece doesn't have the infrastructure to handle the influx of migrants. And officials say they don't have people to process the many asylum claims it will now receive.

The country has been deep in a debt crisis and economic downturn that's been called worse than America's "Great Depression."

But the one-for-one plan has also been criticized by migrants and human rights groups alike, with many migrants in Greece claiming that information on how to legally seek asylum is not readily available.

And after Amnesty International accused Turkey of sending Syrian refugees back to the war-torn country, Turkey's status as a safe place to send those rejected by Greece has been called into question. Turkey has denied the claim.