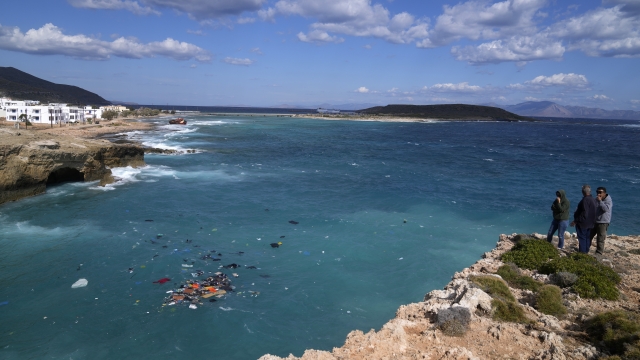 A dinghy carrying 40 people sank off the coast of Lesbos; and hundreds of miles away, off Kythira, a sailboat carrying nearly 100 people also sank.

Bodies floated amid splintered wreckage in the wind-tossed waters off a Greek island Thursday as the death toll from the separate sinkings of two migrant boats rose to 22, with many still missing.

The vessels went down hundreds of miles apart, in one case prompting a dramatic overnight rescue effort as island residents and firefighters pulled shipwrecked migrants to safety up steep cliffs.

The shipwrecks further stoked tension between neighbors Greece and Turkey, who are locked in a heated dispute over maritime boundaries and migration.

"This is a time to really cooperate much more substantially in order to avoid these types of incidents occurring in the future and to completely eradicate the smugglers who prey upon innocent people" trying to reach Europe in unseaworthy boats, Mitsotakis added.

The coast guard on Greece's eastern island of Lesbos said the bodies of 16 young African women, a man and a boy were recovered after a dinghy carrying about 40 people sank. Ten women were rescued, while 12 other migrants were believed to be missing, coast guard officials said.

The last body to be recovered, of a man, was found by divers from the European Union's Frontex border agency who helped in the search and rescue operation, the coast guard said.

"The women who were rescued were in a full state of panic so we are still trying to work out what happened," coast guard spokesman Nikos Kokkalas told Greek state television. "The women were all from African countries, aged 20 upward. ... There is a search on land as well as at sea, and we hope that survivors made it to land."

The second rescue effort was launched several hundred miles to the southwest, off the island of Kythira, where a sailboat struck rocks and sank.

The bodies of at least four migrants were seen amid floating debris from the yacht under the cliffs. The deaths would be officially recorded when the bodies were recovered, officials said. They added that 80 people, from Iran, Iraq and Afghanistan, had been rescued while a search continues for as many as 11 still believed to be missing.

With winds in the area reaching 45 mph overnight on Kythira, survivors clinging to ropes were pulled to safety up steep cliffs as others were buffeted by waves as they waited their turn on tiny areas of rock at the bottom.

"All the residents here went down to the harbor to try and help," Martha Stathaki, a local resident told The Associated Press.

"We could see the boat smashing against the rocks and people climbing up those rocks to try and save themselves. It was an unbelievable sight."

Kythira is some 250 miles west of Turkey and on a route often used by smugglers to bypass Greece and head directly to Italy.

A volatile dispute is taking place between Greece and Turkey over the safety of migrants at sea, with Athens accusing its neighbor of failing to stop smugglers active on its shoreline and even using migrants to apply political pressure on the European Union.

Most migrants who reach Greece travel from nearby Turkey, but smugglers have changed routes — often taking greater risks — in recent months in an effort to avoid heavily patrolled waters around eastern Greek islands near the Turkish coastline.

"As long as the Turkish coastguard does not prevent their activities, the traffickers cram unfortunate people, without safety measures, into boats that cannot withstand the weather conditions, putting their lives in mortal danger."

Turkey denies the allegations and has publicly accused Greece of carrying out reckless summary deportations, known as pushbacks.