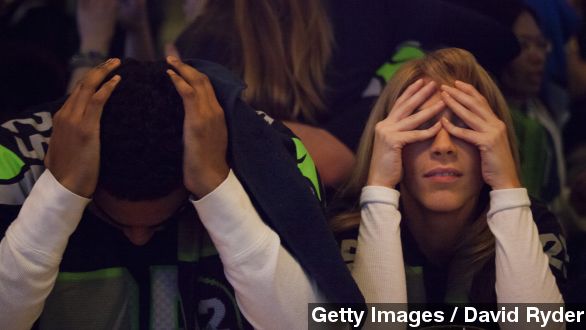 SMS
Great Super Bowl Ends With Worst Play Call ... Ever?
By Jay Strubberg
By Jay Strubberg
February 2, 2015
Seattle's decision to pass instead of run on the Patriots 1-yard line is being referred to by many as the worst play call in football history.
SHOW TRANSCRIPT

It's a decision that took Seattle fans from pure jubilation to complete and utter gut-wrenching disappointment in an instant.

It was 2nd and goal from the Patriots' 1-yard line with one of the NFL's best rushers in the backfield, but Pete Carroll's bunch decided to put the ball in the air.

And Twitter just about broke after the play went down — with fans, former players and more chiming in. The general consensus: worst play call ever.

"Was that really the worst play call ever? I'm not afraid to say it. I cannot believe it happened," Bleacher Report Host Adam Lefkoe said.

"How did one of the smartest coaches in captivity, Pete Carroll, outsmart himself, with the craziest, most non-sensical play call maybe in Super Bowl history," KTLA's Rebecca Hall said.

For his part, Pete Carroll owned up to the mistake. The veteran coach said he was just trying to catch the defensive off-guard.

"We had sent in our personnel. They sent in goal line. It's not the right matchup for us to run the football. On second down we throw the ball really to kind of waste that play. If we score, we do, if we don't, then we'll run it in on third and fourth down," Seattle Seahawks head coach Pete Carroll said.

But that kind of reasoning has fallen on deaf ears among sports analysts. A USA Today writer thought the play call was a no-brainer: "[Marshawn Lynch] is a short-yardage master. ... Hand him the ball, put six defenders on his back and [he] could still rumble for three yards."

Some have already started to stack the odd play call against other infamous lapses of judgement in sports history.

Such as Bill Buckner's error in the 1986 World Series and Chris Webber's timeout when Michigan had none left — a mistake that cost the Wolverines the NCAA title in 1993.

But, as flabbergasted as most were with the ill-conceived play, Seahawks QB Russell Wilson put things into perspective. "We had a good play. If it was a catch it would be a completely different story."

It's a decent point, but try telling that to your "12th man" fan base when you arrive back in Seattle without a Super Bowl trophy to show for this season's hard work.