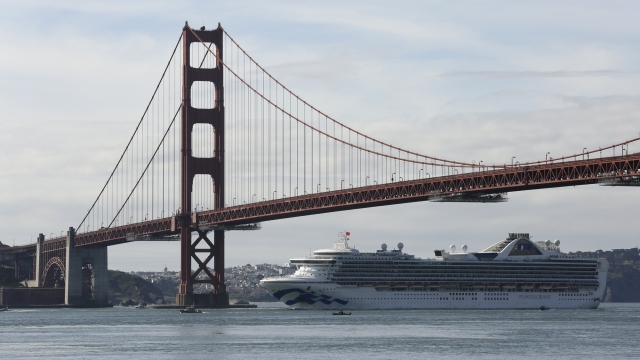 SMS
Grand Princess Passengers To Leave Ship And Begin Quarantine
By Terace Garnier
By Terace Garnier
March 9, 2020
Thousands of passengers will be subject to two weeks of quarantine after 21 people tested positive for coronavirus.
SHOW TRANSCRIPT

Passengers aboard the Grand Princess are finally able to step foot on land today after being stranded for days off the coast of San Francisco.

For Steven and Michele Smith, the knock on the door they'd been waiting for came at 4 a.m.

"Here's a doctor ... in a hazmat suit asking us how we're feeling, [asking] do we have any symptoms? And then he sort of laid out what our day was going to look like today and told us to pack our bags and and enough to carry on that would ... take care of us for 24-36 hours," Steven Smith said.

The Smiths have been in quarantine in their cabin aboard the Grand Princess for five days, but their journey is far from over.

"They told us to be ready for about a two-to-three-day disembarkation process before they'll take us off to where we're going to be quarantined."

And now the Smiths were told they should expect to be quarantined for 14 more days after they disembark.

"We, on the other hand, after five days of being quarantined, still feel very healthy. We have no symptoms at all. So when they want to quarantine us, we are pleading that they only quarantine us for 10 days, being that we've already done five days without any contact with anyone," Michele Smith said.

Those requiring urgent medical treatment will be first off the ship and first to go to health care facilities in California, according to the governor's office. But passengers living in California, like the Smiths, will go to a "federally run isolation facility within the state for testing." The Smiths say they were told that would either be Miramar Naval Air Station or Travis Air Force Base.

And non-residents will be transported to facilities in other states.

"We feel horrible for the people who tested positive and wish and hope and pray that they will get well quickly," Michele Smith said.

As for the ship, it is set to leave the Port of Oakland as soon as it is cleared to depart and will be relocated to an undisclosed location with crew members who will be under quarantine.