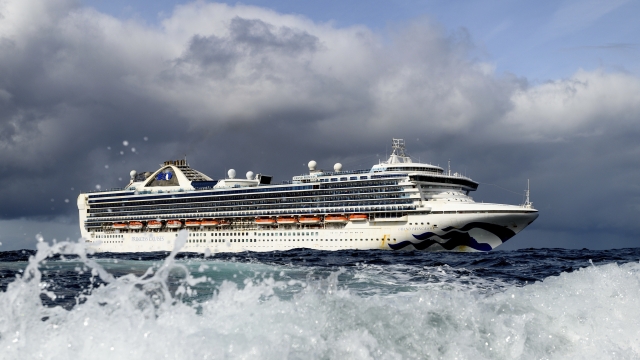 SMS
Grand Princess Cruise Ship To Dock Monday In Oakland
By Katherine Biek
By Katherine Biek
March 9, 2020
The ship has been held off the coast of California since March 4, after a man who'd previously traveled on it died from the virus.
SHOW TRANSCRIPT

Passengers on board the Grand Princess cruise ship will start disembarking when it docks at the Port of Oakland Monday.

The ship was originally supposed to return to the U.S. on Saturday. But it's been held off the coast of California since March 4, after a man who'd previously traveled on the cruise ship in February died from the virus.

While out at sea, dozens of passengers and crew members were screened for the virus. Twenty-one of them tested positive.

Those passengers and crew will be transported to hospitals for treatment once the ship docks. Thousands of others on board the ship will be taken to military facilities around the country, where they'll be tested for the virus and quarantined for 14 days. California Gov. Gavin Newsom said it could take several days to get all passengers off the ship. Crew members, meanwhile, will stay on board the ship for their quarantine.

The coronavirus has killed at least 22 Americans and infected more than 560 others. The majority of deaths have been in Washington state, with others reported in Florida and California.

In order to try to stop the spread of the coronavirus, the State Department is also now advising Americans to not travel by cruise ship.