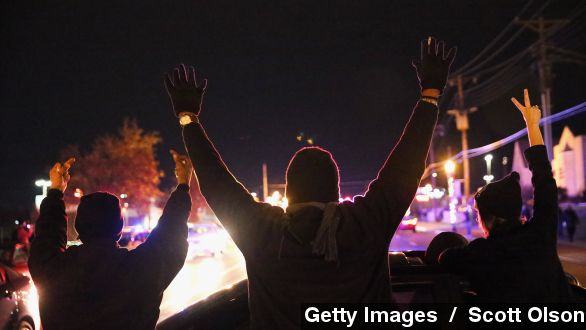 "After their exhaustive review of the evidence, the grand jury deliberated over two days, making their final decision. They determined that no probable cause exists to file any charge against Officer Wilson and returned a no true bill on each of the five indictments," St. Louis County Prosector Robert McCulloch said, via NBC.

Their job wasn’t to determine whether Wilson was guilty — as a typical trial jury would — but rather whether there was enough evidence to charge Wilson in the Aug. 9 shooting. Ultimately, they decided they did not have probable cause to indict him.

Deliberations were kept secret, but we do know they heard from witnesses, including the man at the center of the investigation.

According to the St. Louis Post-Dispatch, Wilson testified before the grand jurors for nearly four hours back in September.

It’s unclear what’s next for Wilson, who’s been on paid administrative leave since August. Now that he’s been cleared of criminal charges, he could legally return to work as a police officer.

But as one St. Louis attorney told ABC, “Whether he would want to is another story."

Missouri Gov. Jay Nixon declared a state of emergency last week, allowing him to activate the National Guard ahead of a possible repeat of this summer’s violent protests. (Video via State of Missouri)

He also announced the formation of an independent 16-person commission charged with examining the underlying social and economic conditions that sparked this summer’s unrest.