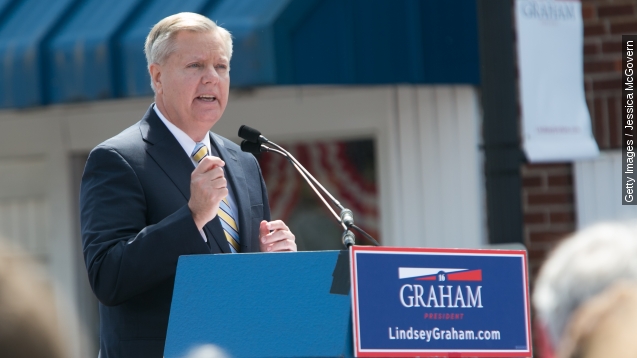 Republican presidential hopeful Sen. Lindsey Graham joined South Carolina Gov. Nikki Haley as she called for the removal of the confederate flag from state grounds and for it to be put in a museum.

"My hope is that by removing a symbol that divides us we can move forward as a state in harmony and honor the nine souls who are now in heaven," Haley said.

Haley also said if the state legislature didn't vote on the issue during its regular session, she would call an emergency session to debate the issue.

The flag, which flies on the grounds of South Carolina's capitol building in Columbia, became the subject of intense controversy after nine African Americans were killed in a mass shooting at Emanuel A.M.E. Church. The shooting is being investigated as a hate crime.

Graham, South Carolina's senior senator, didn't voice his opinion at the conference, instead standing silently alongside Haley as she made the call for it to be taken down. In the past, Graham had said that decision falls to the state legislature.

"At the end of the day, it's time for people to revisit that decision. That would be fine with me. But this is part of who we are," Graham said.

That's a sentiment echoed by many Republican presidential rivals who've been fielding questions about it since the shooting.

"I don't think the federal government or federal candidates need to be making decisions on everything or pining on everything. This is a decision that should be made here in South Carolina," Rick Santorum said on ABC.

Ex-Florida governor Jeb Bush issued a statement Saturday saying he trusted South Carolina "will do the right thing." It's worth mentioning that when Bush was governor of Florida, he had the flag removed from outside the state capitol and put in a museum. (Video via Jeb Bush)

Haley's remarks Monday came immediately after other state and local political leaders called for the flag to be removed. South Carolina's black caucus said it plans to introduce a resolution beginning debate on the flag's removal Tuesday.

This video includes images from Getty Images and eyeliam / CC BY 2.0.