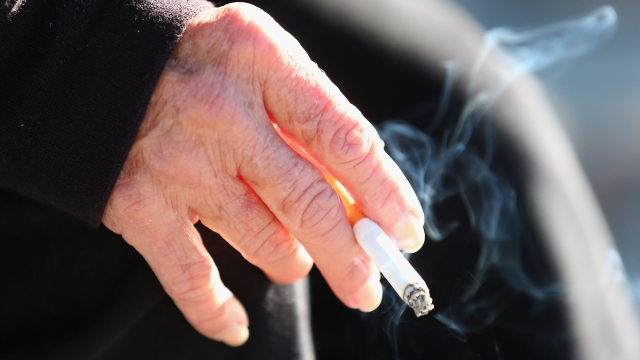 SMS
Gradually Or Cold Turkey? Study Finds The Best Way To Quit Smoking
By Grant Suneson
By Grant Suneson
March 14, 2016
A University of Oxford study found that smokers who want to quit have a better chance of success if they try to quit abruptly rather than gradually.
SHOW TRANSCRIPT

When it comes to quitting smoking, there are two schools of thought on how to get to that last cigarette. Some prefer to slowly reduce their nicotine intake before trying to quit, while others simply quit cold turkey.

Researchers at the University of Oxford wanted to know which strategy is more effective. So they formulated a study, published in the journal Annals of Internal Medicine, that put the two methods head-to-head.

Almost 700 smokers who wanted to quit were divided into two groups: gradual cessation and abrupt cessation. The abrupt cessation group picked a day to quit smoking and didn’t change their nicotine habits leading up to that date.

The gradual group also picked a day and weaned themselves off nicotine in the two weeks leading up to the quit date. Both groups had access to counseling and nicotine replacement therapy.

Based on the results, going cold turkey is the best option. Four weeks after their quit day, 49 percent of abrupt cessation participants were able to kick the habit compared to 39 percent of the gradual cessation group.

Unfortunately, that means most people in both groups failed to quit.

Lead researcher Dr. Nicola Lindson-Hawley theorized that having to plan out a nicotine schedule was more harmful than helpful, saying "it provided them with an extra thing to do, which may have put them off quitting altogether."

But the study admits going from a heavy tobacco user to smoke-free overnight isn’t the best option for everyone.

Dr. Lindson-Hawley said: "Many people cannot imagine being able to stop completely. For these people, it is much better to attempt to cut down their smoking than do nothing at all."

This video includes a clip from University of Oxford.