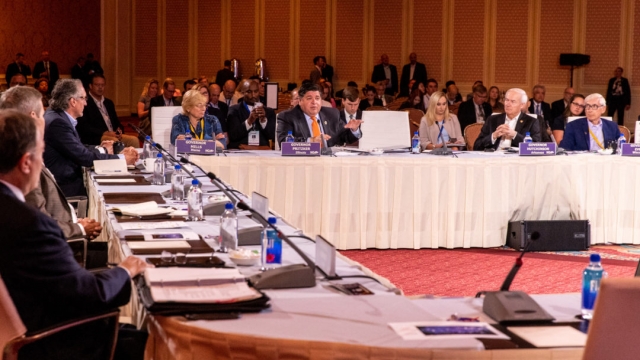 SMS
Governors Ask Congress For $500B To Cover States' Costs From COVID-19
By LeeAnne Lowry
By LeeAnne Lowry
April 11, 2020
Leaders of a bipartisan group of governors released a statement Saturday, asking for urgent financial help for impacted states.
SHOW TRANSCRIPT

The National Governors Association is asking Congress for $500 billion as the fight against COVID-19 is worsening state budget deficits.

Maryland Gov. Larry Hogan and New York Gov. Andrew Cuomo, the leaders of the bipartisan group, released a joint statement on Saturday. It says public health strategies to stop the virus are working, but they're also causing "catastrophic damage to state economies."

It went on to say that states will "have to confront the prospect of significant reductions to critically important services all across this country" without emergency aid.

The governors noted that the CARES Act — which was signed into law last month — didn't include funding for states.

Congress has been working on another relief package, but it's reached a stalemate. On Thursday, Democrats tried to include $150 billion for states in a small business relief bill. But Republicans argued it was a move to "renegotiate unrelated programs that are not in similar peril."