How Will The Govt. Shutdown Affect Paychecks For Federal Employees? 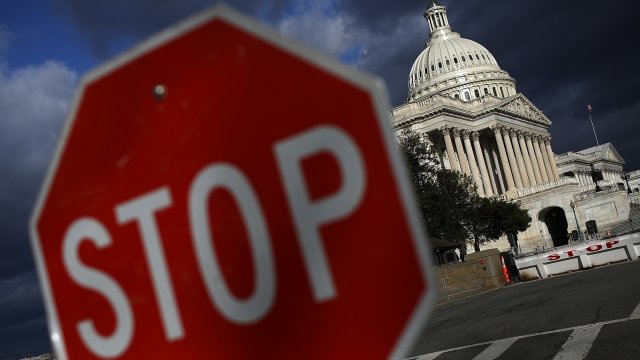 One of the major Democratic talking points surrounding the partial government shutdown centers on federal paychecks.

"About 380,000 employees placed on furlough as we head into the holidays," a CNN anchor said.

"This is crazy, and who is going to be hurt? It is all the people who will be furloughed," Sen. Mazie Hirono said on MSNBC.

"They'll stay at work but they won't get paid," another CNN anchor said.

"420,000. they will have to work but won't get a paycheck, at least temporarily," CNN anchor Wolf Blitzer said.

The way they tell it, employees immediately felt the impact of the shutdown at 12:01 a.m. Saturday. But a few caveats have been left out of this hyped-up rhetoric.

First, the impact on employee pay largely depends on how long the shutdown lasts. The first four days are either weekends or federal holidays, thanks to an executive order from President Trump that declared Christmas Eve a holiday for 2018. So Wednesday the 26th is the first day that larger effects would likely set in.

Another point to keep in mind is the payday schedule. Payroll schedules vary by department, but many of the agencies affected by this partial shutdown aren't due for a payday until Dec. 28 or later.

If the shutdown is extended, paychecks could certainly be delayed. Any essential employees who work during the funding lapse will get paid once a budget is signed. Furloughed workers don't have the same guarantee. However, Congress traditionally passes legislation to retroactively pay everyone sent home as a non-essential employee.

The Senate passed a bill Friday to guarantee that furloughed employees get back-pay once a budget is signed. It would also get those paychecks out as soon as possible, regardless of the payroll calendar. Similar bills have been introduced in the House, but the likelihood that any of them will pass before the end of this session of Congress is slim.