SNAP, Food Assistance Programs Could Run Out Of Funding Amid Shutdown 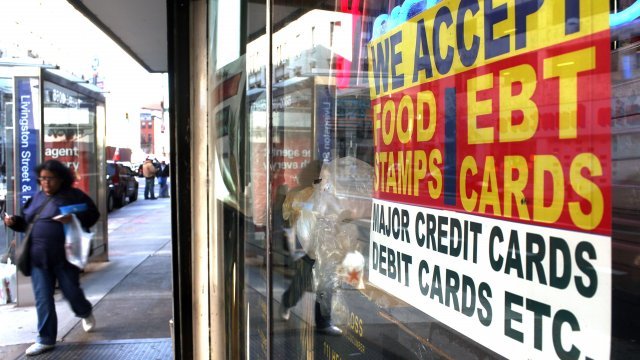 SMS
SNAP, Food Assistance Programs Could Run Out Of Funding Amid Shutdown
By Nnamdi Egwuonwu
By Nnamdi Egwuonwu
January 7, 2019
Food assistance programs like SNAP and WIC will be without funding in the near future if federal legislation isn't passed.
SHOW TRANSCRIPT

As the partial government shutdown heads into its third week, funding for several food-assistance programs may be in jeopardy.

SNAP operates under the Department of Agriculture, and it only has enough money to operate as-is through January. The program's emergency funding reportedly won't be enough to cover all of February's costs, meaning there could be cuts. If funding legislation isn't passed by March, millions may lose access to food benefits.

According to the Center of Budget and Policy Priorities, 42 million Americans used SNAP in 2017. Nearly 70 percent of them were in families with children.

The Department of Agriculture says school breakfast and lunch programs will continue providing services for students through February. WIC, a similar food program geared toward women and young children, has received no federal funding since the shutdown began.