Government Shutdown Leading Some TSA Agents To Call In Sick 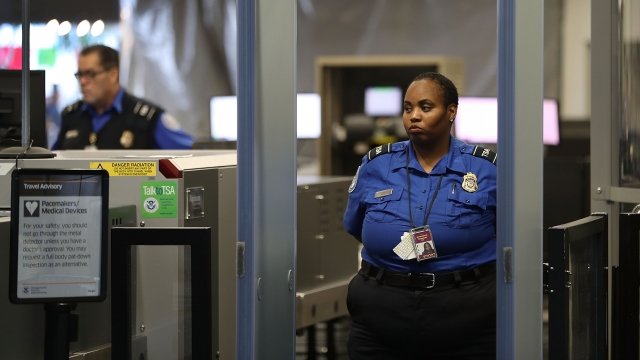 SMS
Government Shutdown Leading Some TSA Agents To Call In Sick
By Katherine Biek
By Katherine Biek
January 7, 2019
Airport security screeners are some of the federal employees required to work during the partial government shutdown without a paycheck.
SHOW TRANSCRIPT

As the partial government shutdown continues, the TSA is warning passengers that they might experience longer wait times to get through airport security.

That's because hundreds of airport screeners across the nation are reportedly choosing to call in sick instead of working without knowing when they're going to get paid.

An unnamed TSA official told CNN that the number of agents calling in sick last week just at the Dallas-Fort Worth International Airport had increased by as much as 300 percent. And some TSA employees at John F. Kennedy Airport in New York were required to work overtime earlier this month to cover their colleagues' absences.

The Department of Homeland Security, which oversees the TSA, is just one of a number of government agencies whose funding expired last month.

Some government roles are considered essential during a shutdown — including airport security screeners, air traffic controllers and customs agents. So they're all required to work without pay until the government reopens.

In a statement last week, a TSA spokesperson said airport screening wait times were still "well within TSA standards." But since then, furloughed employees have missed a paycheck and TSA union officials say that might cause some agents to look into finding a another job that will actually pay them.