Government's Deal With Apple Pay Is Big For Mobile Payments 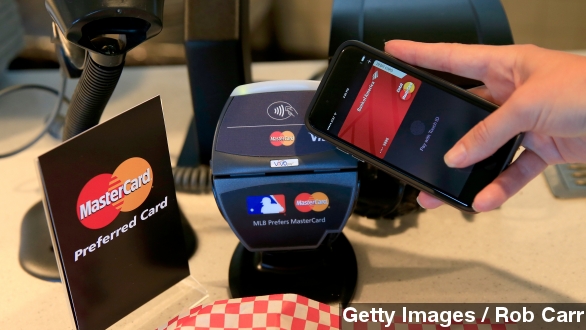 The U.S. government will soon support Apple Pay for certain transactions. And that could have big effects, not just for Apple but for mobile payments as a whole.

The tech and financial industries are hoping mobile payments will be the next big thing, but consumers really haven't seemed too interested so far. (Video via Google)

So there will likely be a lot of focus on whether people embrace Apple Pay through the federal government.

At first, the service will only be available for small things like paying for admission to national parks. But in the future it will extend to things like Social Security payments and veteran's pensions.

Apple Pay is essentially acting as an optional replacement for pre-paid debit cards that are automatically refilled for people receiving payments from the government. (Video via TechCrunch)

One of the programs that manages those cards is GSA SmartPay, which the General Services Administration says is the largest government payment program in the world. It handles 87.4 million transactions per year for a total of about $26.4 billion.

But it's not just the scale of this deal that makes it significant. The federal government's embrace of Apple Pay could grant mobile payments the credibility it needs if the technology will ever become a new norm in commerce.

Plus, The White House giving Apple Pay its stamp of approval will likely go a long way toward making people feel mobile payments are safe and secure at a time when breaches in cybersecurity are almost commonplace.