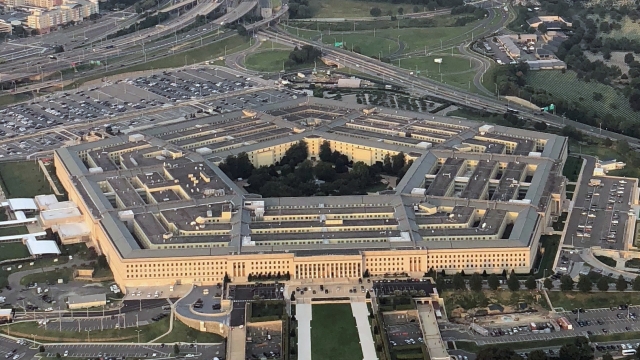 SMS
UFO Report Due In June, As Government Is Accused Of Withholding Info
By Sasha Ingber
By Sasha Ingber
May 28, 2021
Navy images of UFOs have leaked in recent weeks, as lawmakers, former military personnel, and researchers await a report.
SHOW TRANSCRIPT

Sean Cahill was aboard the USS Princeton in 2004 when he saw a now-famous sight:

"I saw five to seven lights in the sky that moved toward a center area and all blinked out very quickly in a very exotic manner," says the retired Chief Master-at-Arms for the U.S. Navy.

These white oblong aircrafts, later nicknamed Tic Tacs, had no sign of propulsion, no wings, and no heat.

"The Tic Tacs were coming in at roughly suborbital, at around 80,000 feet and then dropping directly down to the water in an instant," Cahill says.

Later that day service members joked about aliens, and were told to get back to work. It’s a pattern Cahill and others say has continued at the Defense Department: that the government has been covering up whatever it knows about UFOs -- spreading false information and stymieing requests for documents under FOIA, the Freedom of Information Act.

A government report on UFOs that senators asked for last year is due in June. And many are eagerly, albeit cynically, waiting for a public version.

"When you deal with the UFO topic, it seems like the government goes out of their way to not give you the truth or at least the full truth."

"Although we don't have the exact reason why, we know for a fact, whatever it is, it's a threat to national security if they release the truth," Greenewald says.

Leaked Navy images have cropped up in recent weeks. Observers speculate that what service members have been seeing more and more in the sky...

… is either extraterrestrial, ultra-secret U.S. technology, or our adversaries, cleverly using the stigma of reporting UFOs and looking crazy, to conduct surveillance.

Pentagon records show the government has investigated what it calls “Unidentified Aerial Phenomena'' for decades, even after ending a 22-year effort called Project Blue Book in 1969. That program concluded that nothing pointed to alien vehicles or exceeded their scientific knowledge. But today... is a different story.

"The technology would be similar if you took an F-18 and flew it in front of the most advanced scientists in the 16th century and asked them to explain to you how that effort worked," says Robert Powell.

He's a founding member of an organization that analyzes sightings all over the world.

"The military of all the major nations have had these sightings," Powell says. "We've asked the government to basically release as much information as they can so the scientific community can examine the data and draw conclusions. Right now, scientists can't do that because the government keeps all the data."

The Pentagon declined to comment for this story. Its Unidentified Aerial Phenomena Task Force is charged with detecting, cataloguing, and analyzing UFOs -- 2:38/2:40 in the wake of a secret program sponsored by former Sen. Harry Reid.

Meanwhile, the Defense Department’s Inspector General is conducting an evaluation into the department’s actions on UFOs.