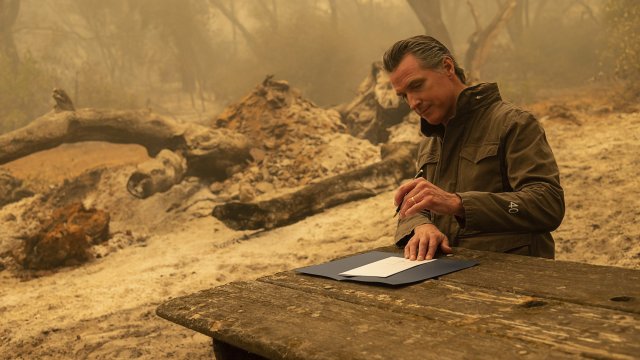 After touring a fire zone in Northern California, Governor Gavin Newsom signed a bill that will allow certain prisoners battling the blazes the chance to have their records expunged after their sentences are completed.

The bill says, "These individuals have received valuable training and placed themselves in danger to defend the life and property of Californians. Those individuals that successfully complete their service in the fire camp s should be granted special consideration relating to their underlying criminal conviction."

The bill doesn't apply to violent offenders, who are already barred from fighting the fires. But it would make other inmates eligible to receive Emergency Medical Technician certification required by municipal fire departments. Previously, inmates couldn't become EMTs after their release due to having criminal records.

This comes at a time when the need for firefighters is at its highest yet, with the state experiencing historic fire storms, worsened by climate change.

California has struggled to incentivize enough inmates for firefighting duties in part because state prisons are housing fewer low-level offenders who are permitted to do the work. This year, thousands of inmates were released early to slow the spread of the coronavirus.

Newsom signed the bill after touring part of the North Complex Fire which has burned more than 250,000 acres.

"We have now currently have five active fires that are five of the most destructive fires over the last, in the history of the state," Governor Newsom said.