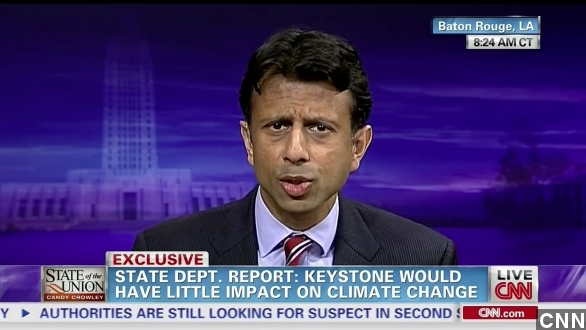 BOBBY JINDAL: "This is a no-brainer. this decision should have been made a long time ago. The Canadians are going to go and get this oil. The question is whether they sell it to us or the Chinese." (Via CNN)

Though the president's chief of staff, Denis McDonough, also sat with the Sunday shows, and made no promises on the issue. (Via The White House / Pete Souza)

MCDONOUGH: "It should not significantly exacerbate what is a significant climate change crisis we face in this country ... What the president's role is now is to protect this process from politics, let the experts, the expert agencies and the cabinet secretaries make their assessments." (Via CBS)

Friday, a report from the State Department downplayed environmental concerns, seeming to clear a way for Obama to approve the pipeline project. It would stretch from Alberta, Canada down to Louisiana. (Via Wikimedia Commons / shannonpatrick17, Wikimedia Commons / Meclee)

Though environmentalists, like those at Friends of the Earth, are crying foul, pointing to a potential conflict of interest: "the oil industry has had a direct pipeline into the agency. Perhaps most frustrating, is the apparent collusion between the State Department, oil industry and the Canadian government."

McDonough refused to set out a timeline for when the president might make a decision on the issue.