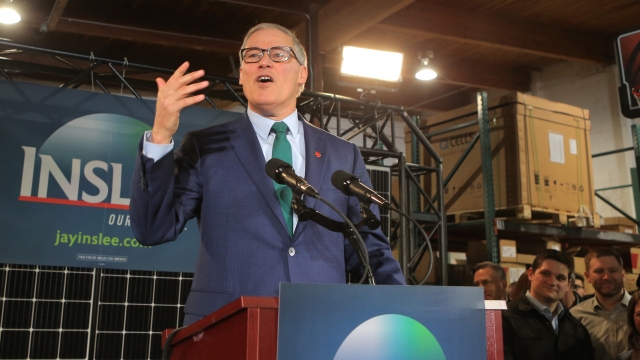 SMS
This Presidential Candidate Wants The US To Run On 100% Clean Energy
By Cristina Mutchler
By Cristina Mutchler
May 3, 2019
Washington Gov. Jay Inslee rolled out his plan to combat climate change by transitioning the U.S. to 100 percent clean energy by 2030.
SHOW TRANSCRIPT

The proposal aims to reach 100 percent clean energy in the U.S. by 2035. Inslee suggests doing that by implementing a few measures, like requiring zero emissions in new vehicles, prohibiting carbon pollution from buildings and cutting U.S. coal production.

If the plan were put in place, it would completely transform the nation's power grid.

Admitting the proposal is "ambitious," the Democratic hopeful said the move stems from a personal commitment.

"I love being governor of the most dynamic, diverse tolerant state in the union, but I had to make a decision about what we're doing for my grandchildren, three grandkids. And I made this decision," he said. "I decided on my death bed, I wanted to be able to look at my three grandkids in the eye and tell them that I did everything humanly possible to rescue them from the monster of climate change."

Inslee's environmental track record is pretty strong, and he's hoping it can separate him from an already-crowded field of candidates.

During his two terms as governor, he's championed issues like enacting a Clean Energy Fund and passing green transportation and infrastructure legislation.

His Friday proposal is based on a 100 percent clean energy plan that Washington state legislators passed in April.