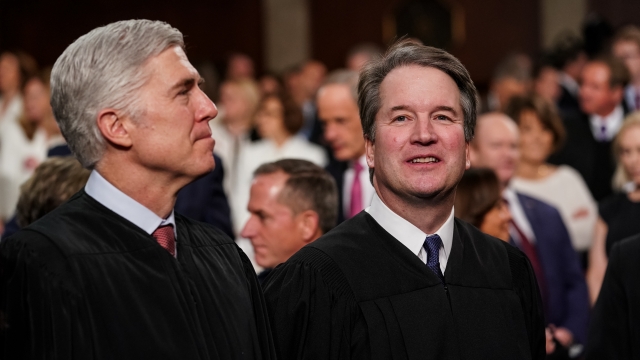 The 5-4 conservative Supreme Court made a 5-4 decision in a case about gun crimes on Monday. And President Donald Trump's Supreme Court pick Justice Neil Gorsuch sided with the liberal justices.

Gorsuch wrote the majority opinion in United States v. Davis. The high court decided that a law named in the case is unconstitutionally vague when it comes to enforcing tougher criminal sentences for using a gun during a "crime of violence."

The case involved two men, Maurice Davis and Andre Glover, who were convicted on several felony robbery charges: one count of conspiracy to commit robbery and two counts each of brandishing a shotgun during a crime of violence.

Gorsuch wrote that there's "no reliable way to determine which offenses qualify as crimes of violence." He also said, "Vague laws ... hand off the legislature's responsibility for defining criminal behavior to unelected prosecutors and judges."

President Trump's other Supreme Court pick, Justice Brett Kavanaugh, wrote the dissenting opinion and said "The Court's decision ... will likely mean that thousands of inmates who committed violent gun crimes will be released far earlier than Congress specified" when it enacted the law in question. He also said the ruling will make it "harder to prosecute violent gun crimes in the future." But Gorsuch said, "In our constitutional order, a vague law is no law at all."

The majority opinion pointed to two other recent cases where it also decided against violent crime laws it believed to be too vague.

Davis and Glover are serving sentences of more than 50 years and more than 41 years, respectively. This ruling could mean their prison sentences for gun crimes will be shortened. However, Monday's ruling won't affect the sentences for their other convictions.