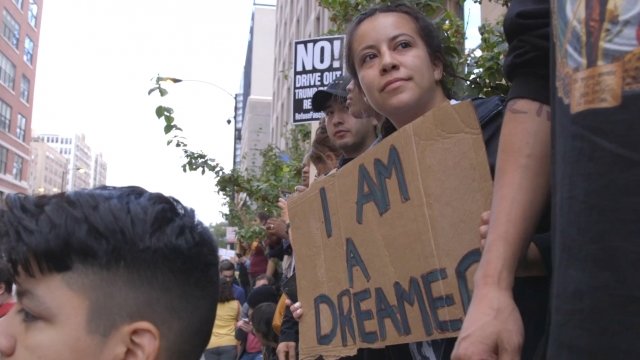 SMS
GOP Whip Says A Vote On Immigration In The House Isn't Guaranteed
By Caitlin Baldwin
By Caitlin Baldwin
January 23, 2018
The House majority whip said Republicans would need to get something in exchange if they voted for Democrats' DACA funding.
SHOW TRANSCRIPT

House Republican Whip Steve Scalise says a vote on protection for young undocumented immigrants won't be taken up in the House unless there's also funding for a border wall.

It comes after Senate Majority Leader Mitch McConnell promised the Senate a vote on the Deferred Action for Childhood Arrivals program by Feb. 8. In exchange, Senate Democrats helped pass a stop-gap spending bill that reopened the government.

Scalise told reporters Monday McConnell's promise doesn't hold much weight, saying, "There were no commitments made in the House," adding, "I think we've been very clear that any final solution has to include funding for a wall."

And Monday morning, President Donald Trump's Budget Director Mick Mulvaney told CNN a vote will depend on what Republicans get.