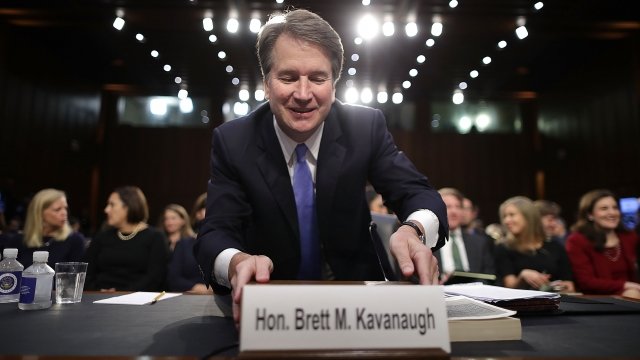 At least two Republican lawmakers want to delay a Senate committee vote on Supreme Court nominee Brett Kavanaugh after a woman said he sexually assaulted her decades ago.

The Washington Post published a report Sunday detailing Christine Blasey Ford's claims. She says Kavanaugh "pinned her to a bed" and tried to undress her while "grinding his body against hers" back in the early 1980s when the two were in high school.

Ford sent a confidential letter detailing the incident to Democratic Sen. Dianne Feinstein in late July. Ford decided to go public with her allegation after the story leaked earlier this month.

The Senate Judiciary Committee is scheduled to vote to advance Kavanaugh's nomination Thursday but Republican Sen. Jeff Flake and a number of Democrats called for it to be postponed. Flake told Politico Sunday that he's "not comfortable" voting for Kavanaugh until lawmakers hear from Ford.

GOP Sen. Bob Corker also called for a delay Sunday — though he's not a member of the committee.

A spokesman for Judiciary Committee Chairman Chuck Grassley said he's trying to schedule phone interviews with both Ford and Kavanaugh ahead of Thursday's vote.

Ford's attorney said Monday her client is willing to testify in front of the panel.

When it comes to the full Senate, Kavanaugh needs only a simple majority to get confirmed. Due to the 51-49 split in the Senate, Republicans would need to be nearly unanimous, or persuade a few Democrats over to their side.