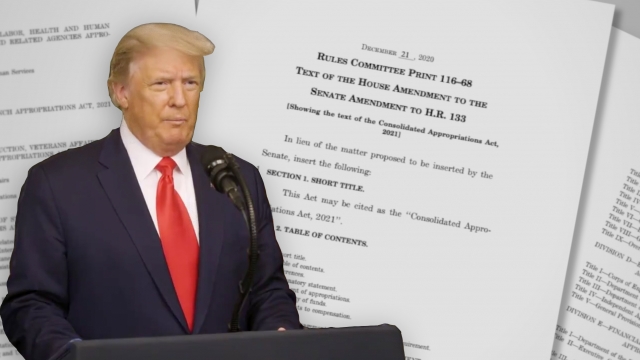 SMS
Pres. Trump Threatens Funding Bill, Covid Relief Deal
By Nathaniel Reed
By Nathaniel Reed
December 23, 2020
If the president vetos the bill, the government could shut down and Americans are unlikely to receive $600 stimulus checks until at least mid-January.
SHOW TRANSCRIPT

Washington is on edge after President Trump released a video attacking provisions in a bill that would send $600 stimulus checks to most Americans, which passed Congress earlier this week.

If President Trump chooses to veto it — government funding will run out next Monday, and it's unclear if lawmakers can act in time to avert a last-minute government shutdown.

In this case— Congress’ yearly omnibus spending bill was paired with the latest Covid relief package.

“What we have here is two separate bills,” Glassman explained.

“It’s called the Covid relief bill, but it has almost nothing to do with Covid,” President Trump said in the video, posted to Twitter on Tuesday evening. “This bill contains $85.5 million for assistance to Cambodia, $134 million to Burma, $1.3 billion for Egypt and the Egyptian military.”

"That's exactly what [President Trump’s] budget request asked for,” Glassman pointed out. “For that military aid."

Ironically, the bills were combined in an effort for the combined end-of-year measures to pass Congress faster.

“When you see: ‘money [is] being sent for Egypt for Covid’ — it is not true,” Congressman Don Bacon, a Republican from Nebraska, told Newsy’s Alex Miller on Wednesday.

According to Bacon, despite President Trump’s statement, the White House was directly involved in the process.

“His team helped negotiate the package we voted on and recommended that we support it,” Bacon said. “So yes, I’m disappointed.”

In addition to criticizing the yearly funding his own administration requested for USAID and the State Department, President Trump also said he took issue with miscellaneous portions of the bill.

Buried in the over 5,500 pages of this year’s spending bill are provisions which authorize two new Smithsonian Museums, establish an anti-doping program for horse racing, and stipulate the federal government defund the Association of Community Organizations for Reform Now (ACORN), a defunct aid group which went out of business over ten years ago.

"The government is not going to be shut down indefinitely,” he added, “eventually the appropriations bills have to pass.”

According to Glassman, some of these miscellaneous items already had bipartisan support in Congress, and and others simply allow lawmakers to brag about their inclusion — like the provision defunding ACORN.

These provisions give some lawmakers more incentive to vote in favor of the final bill. But it wasn't until Wednesday, after the bill overwhelmingly passed both Houses of Congress, that the President made his opposition known — hours after his own negotiators praised its passage.

“His team was the one who said we should support this bill,” Bacon said. “So I’m troubled by it.”