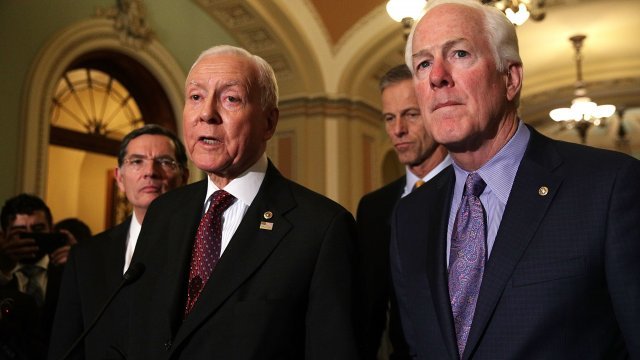 They want to get the deal to the president next week.

Republican congressional leaders have reportedly reached an agreement on a tax reform bill.

The GOP has been under immense pressure to pass an overhaul bill. The deal, which was announced Wednesday, was likely helped along by the fact that Republicans are about to lose a Senate seat to newly elected Democrat Doug Jones.

Multiple changes were reportedly made as part of the agreement. Some notable ones include lowering the corporate tax rate from 35 percent to 21 percent by 2018. Previous versions of the bill dropped that rate to 20 percent. A version unveiled by Senate GOP last month delayed the cut until 2019.

The GOP target of cutting the current 35 percent corporate tax rate might actually end up being slightly higher than the planned 20 percent.

And the top individual tax rate will reportedly be set at 37 percent — lower than the rates presented in earlier House and Senate versions of the tax bill.

The deal may also quiet some of the criticism coming from the housing industry. Right now, new homeowners can deduct the first $1 million they pay in mortgage interest from their tax bill. The House of Representatives' Tax Cuts and Jobs Act cut that deduction in half to $500,000.

GOP leaders reportedly agreed to meet in the middle and allow a $750,000 deduction.

Republicans hope to have the tax bill passed by both chambers and on President Donald Trump's desk before Christmas.