GOP Politicians Side With The Khans But Ignore Trump's Insults 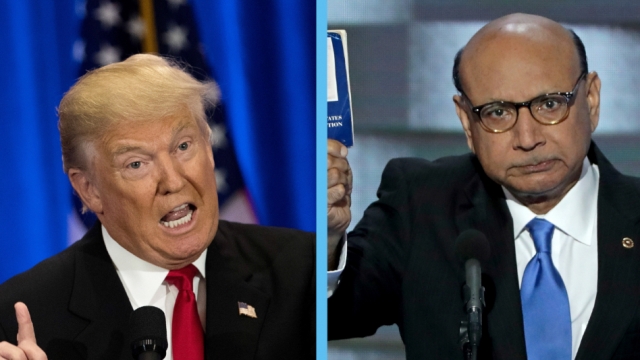 Republican politicians are sticking up for the family of a slain Muslim U.S. soldier. But they're leaving Donald Trump and his comments out of their statements.

Khan criticized Trump in his Democratic National Convention speech, and Trump later came back with hits to both Khan and Khan's wife, Ghazala.

Paul Ryan's statement said, "Many Muslim Americans have served valiantly in our military and made the ultimate sacrifice."

Ohio Gov. John Kasich tweeted, "There's only one way to talk about Gold Star parents: with honor and respect. Capt. Khan is a hero."

And U.S. Sen. Lindsay Graham told the New York Times, "This is going to a place where we've never gone before, to push back against the families of the fallen."

This seems to be a continuing pattern: Trump says something controversial, and GOP politicians distance themselves.

"He promised to the Republican leadership that he will change his manner ... but he had continued," Khan said on CNN.

But Khan is onto the overarching theme here — Trump doesn't seem likely to change anytime soon.