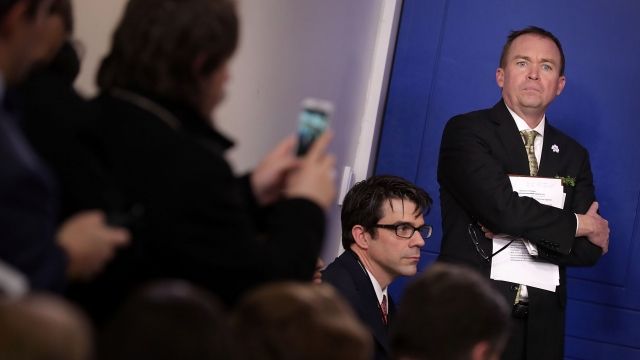 The White House has an offer it hopes Democrats can't refuse.

It's the president's latest deal-making strategy that Office of Management and Budget Director Mick Mulvaney laid out:

A cost-sharing reduction, or CSR, is a subsidy the government pays insurers to keep costs down for lower-income Americans. Under former President Barack Obama, House Republicans successfully challenged the payments in court, but an appeal has allowed those payments to continue. Trump could change that by discontinuing that appeal process.

This recent offer from Republicans would help avoid the looming government shutdown.

But some Democrats aren't buying it.

A spokesperson for Senate Minority Leader Chuck Schumer called the White House offer a "gambit," pointing out the president promised during the campaign that Mexico would pay for the border project.

And House Minority Leader Nancy Pelosi's office also clapped back, reminding Republicans, including Mulvaney, that they contributed to a government shutdown in 2013.

If there's no deal, the government will partially shut down April 29: Trump's 100th day in office.