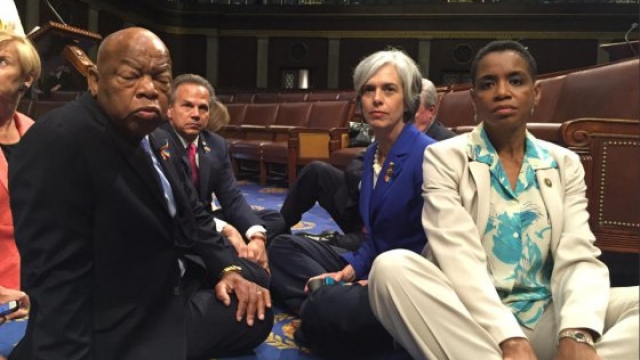 SMS
GOP Moves To Ban Photos And Live-Streaming From The House Floor
By Ryan Biek
By Ryan Biek
December 27, 2016
It's seen as a direct response to the Democrats' sit-in back in June.
SHOW TRANSCRIPT

The next time lawmakers protest inside the Capitol, they might not be able to show it.

House Republicans have proposed a law that would fine representatives up to $2,500 for taking photos or video from the chamber floor.

It's seen as a response to House Democrats' 25-hour sit-in to try to force a vote on gun control measures back in June. Several representatives live-streamed that protest on social media.

The House's official cameras were turned off at the time because the House wasn't officially called into session.

A spokeswoman for Speaker of the House Paul Ryan said, "These changes will help ensure that order and decorum are preserved."

Rep. Eric Swalwell –– who live-streamed the sit-in –– responded with "Bring.It.On."

The new rules would also fine members for blocking the microphones or the front of the House floor.

Late on the night of the sit-in, when the House was abruptly called back into session for a different matter, Democrats stayed on the floor and chanted.