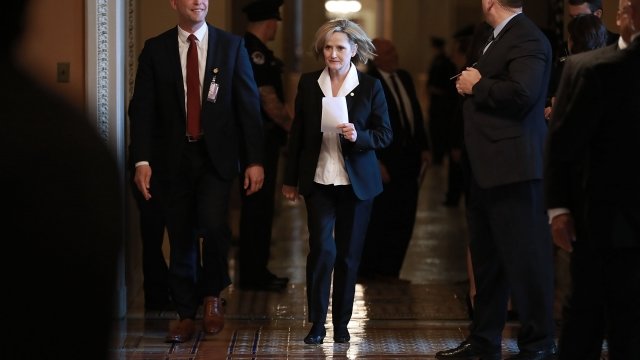 By Kellan Howell
November 23, 2018
There's one more Senate race left in the 2018 Midterms and GOP missteps could give Democrats a shot in deep red Mississippi.
SHOW TRANSCRIPT

The midterm elections aren’t over yet. Democrats are hoping to flip a solidly red Senate seat in Mississippi next week when appointed Republican Sen. Cindy Hyde-Smith and Democrat Mike Espy go head-to-head in a runoff election.

Mississippi has long been a Republican stronghold. President Donald Trump won the state by 18 points and Republican Sen. Roger Wicker won re-election this month by 20 points.

But in recent weeks the southern Senate contest has gotten a lot more competitive, and a lot of that has to do with race.

Since the Nov. 6 primary, Hyde-Smith has gotten herself into hot water over some racially charged gaffes.

First, Hyde-Smith seemingly said she would attend a public hanging -- in a state with a deep history of lynchings.

"If he invited me to a public hanging, I’d be on the front row," she says of one of her supporters in a video that as posted to Twitter.

The comment drew fierce national backlash. On Tuesday, Walmart Stores Inc. pulled it’s support for her campaign and asked her to return a $1,000 donation.

In a statement, Hyde-Smith said her joke about attending a public hanging was meant as an "exaggerated expression of regard" and said "any attempt to turn this into a negative connotation is ridiculous." She apologized for the comment during a debate Tuesday night.

"You know, for anyone that was offended by my comments, I certainly apologize. There was no ill will, no intent whatsoever in my statements," Hyde-Smith said.

But it’s not the only racially-charged gaffe for Hyde-Smith. In another video, she seemingly endorsed voter suppression while talking to supporters -- not great in a state that pioneered Jim Crow laws.

And this week, photos from 2014 resurfaced on Facebook of Hyde-Smith donning a Confederate Soldier’s hat while touring the home of Confederate president Jefferson Davis. The caption on the post? “Mississippi history at its best!”

Hyde-Smith’s blunders and a historic win for Democratic Sen. Doug Jones in neighboring Alabama last year, have given Democrats hope that Espy could become the first black Senator from Mississippi since Reconstruction.

But Espy, a former member of Congress, has his own controversies.

Republicans have seized on his past lobbying work for the Ivory Coast after Fox News reported that he took a $750,000 contract from then-president Laurent Gbagbo. Gbagbo is now on trial for crimes against humanity.

"I found out later that this guy, the President, was a really bad guy. I resigned the contract and I rescinded the last fee that I was due," Espy said during the debate Tuesday.

In 1997, Espy was indicted on 30 charges of receiving improper gifts like sports tickets and airfare while he served as Secretary of Agriculture under then president Bill Clinton. He resigned but was later acquitted of those charges.

Hyde-Smith is still the favorite to win, but some uncertainty has crept in as polls continue to tighten. On Tuesday, Roll Call flipped its rating of Mississippi from solidly Republican to likely Republican.