'No Change' to Supreme Court Nominee Hearing Scheduled for Oct. 12 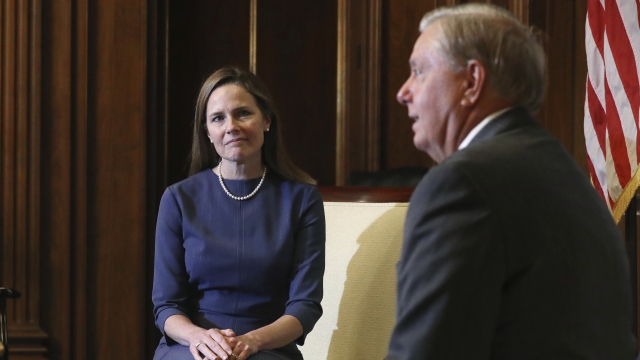 That leaves intact the fastest supreme court confirmation timeline in over three decades.

Top Democrats spoke out over the weekend, after McConnell and Judiciary Committee Chairman Lindsey Graham indicated his committee will move forward next week with hearings to confirm Barrett to the Supreme Court seat that opened up after the passing of Associate Justice Ruth Bader Ginsburg.

Two of the senators testing positive for COVID-19 over the weekend, Sen. Mike Lee (R-Utah) and Senator Thom Tillis (R-North Carolina), are both members of the Judiciary Committee.

The pair announced in separate statements that they will self-isolate for ten days each — the CDC recommended minimum for individuals with mild to moderate symptoms, which both senators reported having.

With their isolation periods set to expire just hours before the hearings begin, Democrats are calling for hearings to be pushed back.

"The idea of having virtual hearings — where no one is with the witness for the highest court in the land for a life appointment that would have such effect on people's lives — makes no sense,” said Sen. Chuck Schumer, the Senate’s highest-ranking Democrat.

In an email sent Monday afternoon, Graham reiterated hearings to confirm President Trump’s pick for the high court are still slated to begin next Monday, October 12 at 9 AM Eastern.

Newsy will carry the historic confirmation hearing in its entirety. To find out how you can watch Newsy on cable, OTT, or streaming platforms, please visit Newsy.com/GO.