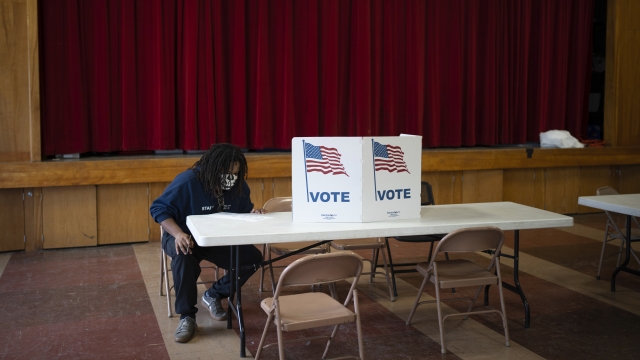 A rise in violent crime across much of the country since the pandemic has become the first line of attack for many GOP lawmakers this midterm cycle, and it seems to be working. According to Gallup, Americans are more likely now than at any time over the past fifty years to say there is more crime than there was a year ago.

Tim Ryan, the subject of many of these ads in Ohio, says his record tells a different story.

"I brought $500 million back to staff policing here in the state of Ohio and he raised money for the guys who stormed the capital on January 6 — he’s with the extremists. You can’t be pro-police, pro-cop and raise money for the people who beat up 140 cops at the Capital," said Ryan.

Political analysts say the focus on crime is twofold. One, it appeals directly to the GOP's most coveted voting block.

"An issue that might galvanize those suburban former Republican voters and bring them back in the fold, I think is a high priority. And fear of crime and the things that advertising can do to raise that fear or concern about it, I think is, you know, a fairly obvious thing to try to appeal to," said Charles Franklin, a pollster and professor at Marquette Law School.

"I mean, I just think there's probably some sort of gut reaction that people have to, you know, basically just violence on television. And the ads reflect that. And again, there's a racial component to it that is, just the unmistakable," said Kyle Kondik, a political analyst at the UVA Center for Politics.

How To Watch 2022 Election Coverage Free On Newsy

Tune in at 6 p.m. ET on Election Night for updates and in-depth reporting on the big races and key issues driving voters this year.

In Milwaukee, Wisconsin the homicide rate increased at a record pace for the past two years — a 96% jump in 2020 and a 2% jump in 2021. But for many of the voters who are most susceptible to crime and see it often in their daily lives — the advertising has a different problem.

Angela Lang is the executive director of BLOC — Black Leaders Organizing Communities. Lang says the imagery in some campaign advertising is meant to send a clear signal about race, like a state GOP mailer that appears to show Wisconsin Senate candidate Mandela Barnes' skin darkened. Republicans say that's not their intent.

Still, Lang recognizes the rise in homicides in her community and the concern it’s created.

She said community members in the area do want something done.

"We've seen some real tragedies in our community but I think we're not being realistic and not talking about the root of those things. Nine times out of 10, it's not people that wake up one day and say, 'yeah, I'm just gonna, you know, do this.' People are often doing it from a place of survival," said Lang.

In Ohio, along with choosing a new senator, voters will have a chance to impact bail reform in the state through a referendum vote.

State issue one in Ohio would change the Constitution to give Ohio lawmakers control of bail rules in the state, and make public safety a consideration when determining cash bail.