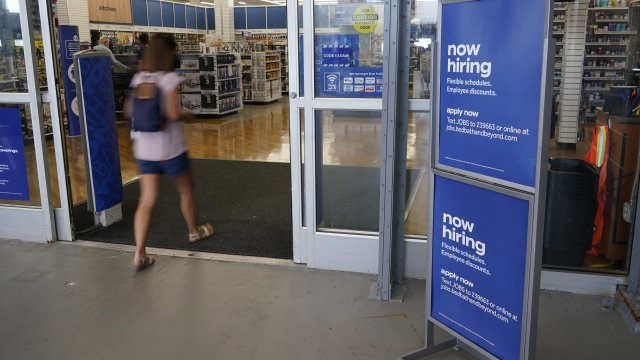 “My biggest problem is staffing right now," Jo Marie Scaglia, owner and creator of The Mixx and Caffetteria, said. "We are probably understaffed by 30 percent."

“Not a lot of people are walking through our doors to take some jobs that we desperately want to give this community," David Lopez, General Manger of Manny's Mexican Restaurant, said.

A recent jobs report fell short of expectations for the Biden administration, with only about a quarter of the 1 million new positions that were expected to be filled.

That’s leading some to blame expanded unemployment benefits for encouraging people to stay at home... and *out of the workforce.

"A great many Kentuckians and Americans look at the situation and found they're better off financially to stay home rather than go back to work," Senate Minority Leader Mitch McConnell said.

The U.S. Chamber of Commerce is calling for an immediate end to a $300-a-week federal unemployment payment which allows one in four recipients to take home *more in unemployment than they did working.

But Commerce Secretary Gina Raimondo, appearing on CBS’s Meet the Press Sunday, disputes that the extended benefits are to blame.

“If you look nationally, wages aren’t going up," Raimondo said. "People are still telling us the number one reason they're not going back to work is fear due to the virus, and more people were looking for work last month than the month before. So, we are, I am engaged with businesses constantly, listening, monitoring, but at the moment it doesn't seem like that is the major impediment."

While some jobs pay less than what a person can make on unemployment... Raimondo cited other issues.

“The number one reason now people aren’t going back to work is what you said, fear," Gina Raimondo said. "Or they can’t find child care or schools are still closed.”

A number of Republican elected officials are moving to *cut* unemployment benefits to push people back to work.

And Republican Sen. Ben Sasse of Nebraska wants a National Signing Bonus Act that would redirect unemployment aid to give *new hires money for taking work.

Meanwhile, businesses struggling to find workers, like the restaurateurs in Kansas City, will keep searching for help.

"We welcome back," David Lopez said. "Let's get people back in the workforce again. Come work for us. We take care of people here in Kansas City."

"I'm hoping some people decide to come back to work," Jo Marie Scaglia said. "It would make my life a little easier."