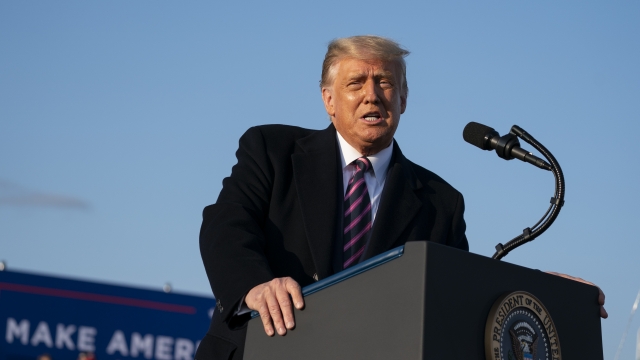 James Packard: "Politics reporter Willie James Inman joins us now, Willy. The president seemed to be reacting in real time to the news of Ginsburg's death last night after he came off the stage in Minnesota. Um, then he ignored a question about putting a name forward to fill the vacancy. Uh, the sun has risen now on the day after, and the president's campaign is putting this front and center now, aren't they?"

Willie James Inman: "Yeah, they certainly are, James, and basically what the campaign sends out on a daily basis to reporters. They send a question for Joe Biden. Today's question is basically 'Where is your Supreme Court list?' Of course, the president has put out a list of nominees that he wants to see on the court. Even last night, as you mentioned, he seemed to react in real time to the news when, when this news broke. Last night, he was speaking in Minnesota at a campaign rally. He was even talking about the Supreme Court and how important it is and that the next president could pick either one to four justices on the court. He even mentioned Ted Cruz, who's he's considered for a Supreme Court pick. So clearly this is important for his campaign, and he's making sure that his voters know that those who support him know how important this decision is for the president of the United States to choose these justices, James."

Packard: "Willie, there's also quickly this interesting idea that there are enough people who would vote strictly because of the balance of the Supreme Court or strictly because they want another conservative justice on the Supreme Court. Um, that the president may want to hold off on nominating someone. Used it, sort of to his advantage in the election. It doesn't seem like he's likely to follow that path."

Inman: "Yeah, it doesn't seem that that's the case. You mentioned this statement the president put out, and I'll just bring it up on our screen for our viewers. He tweeted this earlier today to the GOP. To the Republicans. 'We were put in the position of power and importance to make decisions for the people who so proudly elected us, the most important of which has long been considered to be the selection of the United States Supreme Court justices. We have this obligation without delay.' So, of course, the president probably won't follow that path, James. We know that some conservatives who backed the president back him solely on his decision to pick these federal appoint these federal court judges some 200 more than 200 judges across the nation and also two Supreme Court picks. So some conservatives who might not agree with his leadership style certainly agree with him picking judges to be on the bench."

Packard: "Willie James Inman for us. Willie, thank you very much. Appreciate it."