Google's VR Push Is Now A Lot Stronger Than Cardboard 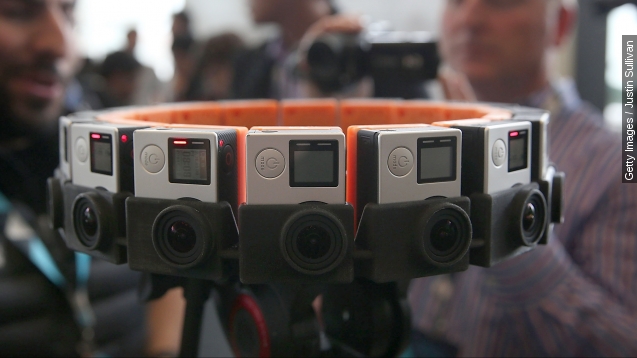 SMS
Google's VR Push Is Now A Lot Stronger Than Cardboard
By Matt Picht
By Matt Picht
May 28, 2015
Google's expanding its VR initiative with Google Jump, which aims to streamline the process of shooting and producing virtual reality videos.
SHOW TRANSCRIPT

For all its merits, Google's cardboard virtual reality headset always seemed like kind of a joke. It's hard to see how Google expects to compete in the VR space with this dinky little OH MY GOD WHAT IS THAT.

Looks like Google's next big contribution to virtual reality centers around this wild camera rig. The tech company announced their new VR initiative Jump at their annual I/O Developers Conference, which involves strapping 16 GoPro cameras together to record 360° video.

But the camera's only the start — Google also unveiled an assembler that will do all the hard work of stitching together 16 feeds into one smooth, stereoscopic video. That footage can then be uploaded to YouTube, which now supports VR material.

Google has about a dozen GoPro rigs out in the wild right now, and there's already a few examples of 360° footage on YouTube. These include an Avicii music video, and footage of sports cars doing donuts. So, the marketing team sure knows what they're doing.

Google's new initiative comes just as the VR arms race is heating up; multiple hi-tech headsets are getting ready to launch. With Google Jump, the tech company is clearly hoping to fill an oft-overlooked gap in the burgeoning sector — the creators.

While most companies are focusing on the VR hardware, cameras and headsets alike, Google's initiative offers a streamlined process for shooting, producing and distributing VR video. That could lighten the technical burden on creators, broaden the VR market, and make Google a lot of money — assuming it catches on.

Let's not totally forget about little Cardboard, though. Google also unveiled a new model of its simple VR viewer which can accommodate larger phones, and announced Cardboard will now support iOS.

The company also announced its shipped over 1 million Cardboard headsets, and has more than 500 Cardboard apps on the Google Play store. That's important because, as Wired writes, "Google Cardboard is VR's gateway drug ... [the] device that makes you realize how amazing this technology can and will be."

Google says it plans to make the blueprints for their Jump rig available to the public this summer, just like they did with Cardboard. Given that the technology revolves around 16 $400 cameras, this DIY project comes with a significantly larger price tag.