Google's High-Tech Teddy Won't Tuck You In At Night 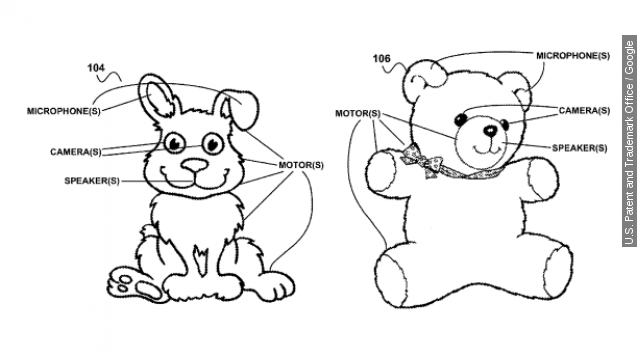 SMS
Google's High-Tech Teddy Won't Tuck You In At Night
By Becca Dunn
By Becca Dunn
May 25, 2015
Google has a patent for a teddy bear that can "aim its gaze" at you. But some are calling it "creepy," and the toy might never make it to market.
SHOW TRANSCRIPT

We may never be able to look at a teddy bear the same way again.

Google has a plan for a high-tech teddy equipped with wireless technologies, motors, cameras, speakers and microphones.

Now, we've seen the evolution of talking toys over the years. But this toy is different. Very different. (Video via CNN)

It's more interactive. It can "express curiosity" and supports social cues. For instance, if you say something or move, the toy can "aim its gaze" at you.

Did you just think of Chucky, too? Yikes.

And we think other people might have similar feelings because words like "creepy" and "terrifying" are being used to describe it.

But this bear isn't necessarily a toy you snuggle with. According to Google's patent application, its main purpose is to make things easier. It can "control a variety of media devices that may comprise a home entertainment system or a home automation system."

So it's basically a fuzzy robot. Or just another type of universal remote ... but with ears. You catch my drift.

Gizmodo says it's basically a spinoff of the Amazon Echo, a voice assistant device that can answer simple questions and respond to your commands. Why is this technology important? Gizmodo explains, "Building a gadget that listens to your commands inside your house might be key to conquering the increasingly connected home."

Looks like the movie "Smart House" was well ahead of its time.

But Google's new teddy bear might not even be developed or sold. A Google spokeswoman told the BBC:

"We file patent applications on a variety of ideas that our employees come up with. ... Some of those ideas later mature into real products or services, some don't."

Google filed a patent for this new high-tech toy in 2012, but the information was only recently published.