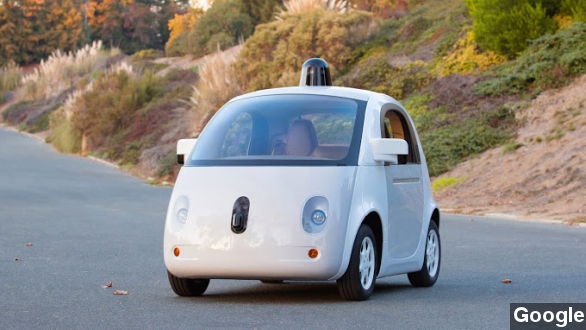 SMS
Google Releases 'Fully Functional' Driverless Car Prototype
By A.J. Feather
By A.J. Feather
December 23, 2014
Google hopes to have a driverless car on the roads in California in 2015.
SHOW TRANSCRIPT

Just in time for Christmas, Google is releasing what it calls the first "real build" of its driverless car prototype.

Google announced the prototype on its blog in May, saying it would only have a start button, stop button, and a screen displaying the route.

Google has attached autonomous-driving technology to standard vehicles for several years, but those cars had steering wheels, brakes and drivers ready to take control at any moment if the computer failed.

The cars — which look nearly identical to the pictures we saw in May — are capped at 25 miles per hour for safety. Google says its planning to keep it in the hands of its own drivers and on its test track for now.

Though according to the self-driving car project's Google+ page, the company hopes to have these prototypes on the streets of Northern California in 2015.

A writer for USA Today described the prototype as a little nerdy, saying, "It's more of a pod than a car, with little wheels and a look that hews heavily to the cute end of the spectrum. Large headlights make it all the more goofy and lovable."

MarketWatch reports the first prototypes will temporarily contain a steering wheel and other manual controls because they are still required under California law.

Even if testing goes well, it might be a while before the pilot program comes to your town. That's because the use of autonomous motor vehicles is currently only legal in Florida, Michigan, Nevada and California. (Via CBS)