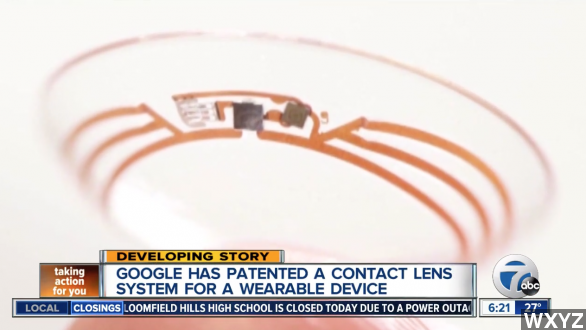 A newly published patent shows off just one more incredibly innovative idea from the engineers at Google. And once again, while some consider a new Google concept the wave of the future, a lot of others think it's creepy as hell.

ANCHOR: "Google may be getting into the contacts business. They just patented a contact lens that will have a built-in camera."

CO-ANCHOR: "It is really neat stuff, and if it helps blind people see? All for it." (Via WBNS)

ANCHOR: "The contacts would be controlled by blinking patterns."

CO-ANCHOR: "If you're at the gym cleaning up after working out and somebody has a camera in their contacts? I mean, come on!" (Via WXYZ)

​​Patent Bolt first reported Google's idea Sunday, reporting the patent application was filed in the fourth quarter of 2012 with the U.S. Patent Office publishing it earlier this month.

In the patent, Google describes how the lenses could help blind people by analyzing and alerting them to hazards like a busy intersection. Facial recognition technology could also deliver an advantage to the blind.

Of course, Patent Bolt also points out: "Think of it being used by law enforcement in checking out a suspect that they're questioning in a vehicle or on the street. The facial recognition system could quickly take a photo of the suspect and run it through a special database matching it to outstanding warrants or other red flags."

Other media outlets like TechCrunch compared the contacts idea to a shrunken version of Google Glass, the wearable tech which also happened to go on sale for one day only Tuesday to anyone willing to shell out $1,500 and become a Google Glass Explorer.

The Huffington Post wrote the lenses almost make Glass look "quaint," while Ubergizmo wrote about this being the next possible version of Glass.

"Now that would be a really scary thought, since it would mean someone could be recording what is going on without you knowing any better."

The patent doesn't indicate when any possible product could go to market, and this certainly seems like a pie-in-the-sky idea for well down the road. It isn't Google's first foray into contacts, either.

The company announced in January it was working on contacts to help people with diabetes. (Via Google Blog)

BRIAN OTIS, GOOGLE X ENGINEER: "This prototype looks and feels like a regular soft contact lens, but inside of it, we have a tiny chip and a miniaturized glucose sensor that allows us to continually monitor to your glucose levels." (Via The Telegraph)

I swear we've seen this before somewhere, though.

ANNOUNCER: "All with the new eyePhone."

PHILIP FRY: "Why is it called an eyePhone?"

TECH: "I'll explain after I install it."

So as so many media outlets reporting Google's patent signed off in their articles, here's the obligatory line about how this is a product worth looking into or how we at Newsy plan to keep our eye on this one. I apologize.