Google Just Added This Feature To The Search Results For 'Depression' 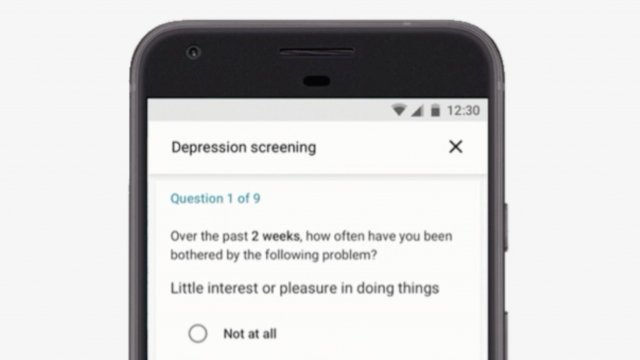 Google partnered with the National Alliance on Mental Illness to add a screening tool to the mobile search results for "depression."

Google wants to make it easier for people to seek mental health treatment.

Partnering with the National Alliance on Mental Illness, or NAMI, Google added a "clinically validated" questionnaire in the search results for "depression" or "clinical depression."

The feature, currently available only on Google mobile searches, is based on the PHQ-9 screening tool — which doctors have used for 18 years to help diagnose mental illnesses like depression and anxiety.

It's not meant to give a complete diagnosis, but Google hopes it will inform and encourage people to talk with their doctors.

Medical professionals have been calling for this sort of action in recent years. Almost two-thirds of Americans use their phones to look up general health concerns, and experts think a better response could prompt more people to seek care.

Computers Can Sense Depression Clues In Your Instagram Pics

Researchers created an algorithm that tries to detect depression based on certain qualities in photos posted to Instagram.

If you told Google Now "I am depressed," it would just search the phrase online. Meanwhile, Samsung's S Voice responded with a variety of answers like, "If it's serious, you may want to seek help from a professional," or, "Maybe the weather is affecting you." None of the voice assistants referred users to professionals or told them about their options.

Google's new questionnaire feature could be just the beginning. Other researchers are searching for more ways to identify mental health concerns and to encourage users to seek treatment.