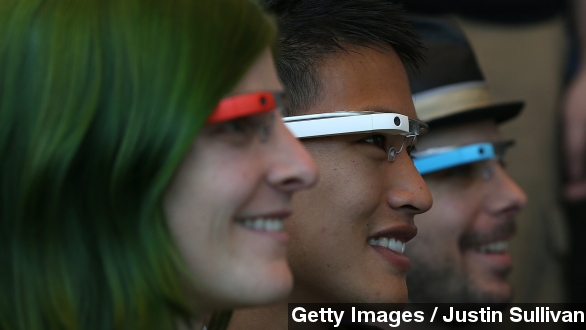 Apparently wearing Google Glass can interfere with your vision. Who'd have thought?

A new study published in JAMA shows the device can create an obstruction in the upper-right portion of the user's field of vision.

The New York Times picked up the story first, opening with, "Is that an email in your eyes, or are you about to get hit by a truck?" and explaining that the lead researcher thought up the idea after he had a close call while driving and wearing Glass.

The study didn't look at Glass as a distraction. The researchers didn't test the effects of focusing on an email instead of the sidewalk ahead of you, or whether prolonged use can affect the eyes. They didn't even turn the devices on while performing the tests.

Nope, all they examined was the effect of trying to see while a mini computer juts out from your right temple. One that's not, you know, see-through.

Seems like kind of a "no duh" study, but it still made the rounds.

WDIV: "I just think somehow I'd either fall down, walk into a wall. There'd just be too much going on right there."

WTVT: "I keep having flashbacks of that Steve Martin movie 'The Jerk,' remember, with that little hook on the eye that causes all the mess?"

And that's bad news for Google. For whatever reason, negative stories about Glass get a lot of press.

Early this year, some San Francisco Glass wearers gave widely-reported accounts of how they were attacked for wearing the devices. (Video via KPIX)

And another study this month made big news when it claimed using the wearable could actually be addictive.

This all could be because tech types just enjoy trashing Glass. Videos of people acting awkward with the device go viral, and Mashable coined the term "Glasshole" almost a year and a half ago.

Maybe that's why the company responded so quickly to the latest study — and with a healthy dose of snark.

In an email, a spokesperson touted Google's efforts to ensure Glass is safe, and said of the research, "Put on your favorite shades, glasses, baseball hat, or hoodie, and you'll quickly see that this study tells us what we already know; wearing something on your face or head may affect your peripheral vision."

For all its ubiquity in the tech world for the past few years, Glass has only been available to the public for about six months. Maybe the hate will wear off eventually.