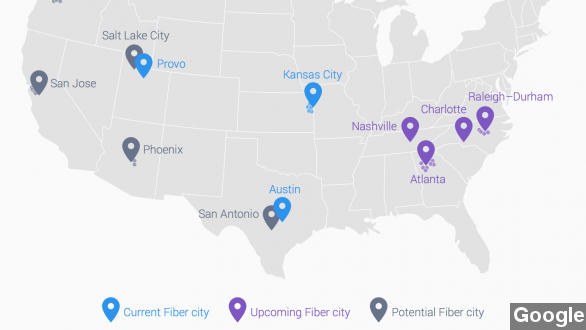 The gigabit broadband race is heating up, and Google Fiber is expanding.

Atlanta, Georgia; Nashville, Tennessee; and Charlotte and Raleigh-Durham in North Carolina are the next cities to get more Fiber in their diets, courtesy of Google.

The company says it’s spent the last year coordinating with city planners on permits and construction agreements. The plan calls for laying down "thousands of miles of fiber" throughout the cities.

The next step will be a multi-month design process, where Google maps out where the network goes. Google wants to piggyback on existing infrastructure, where it can, to help cut down on deployment costs.

As a Techdirt writer points out, those of us who don’t live in the new target cities are left to, once again, appreciate what Google is doing to the broadband industry. (Video via Google)

"While Google Fiber will never likely see a full-fledged national deployment, we've noted repeatedly how the effort is worth its weight in gold for the way it draws attention to the lack of competition in the broadband marketplace."

It's a national issue. The need for faster Internet speeds was pressing enough to warrant mention from President Obama during his State of the Union address earlier this month.

"Modern ports and stronger bridges; faster trains, and the fastest Internet: Democrats and Republicans used to agree on this."

And Google knows how to pick its fights. DSLReports points out North Carolina is incumbent central: territory of AT&T, Centurylink and Time Warner Cable, and complete with ISP-propelled legislation that both banned community broadband projects and watered down the definition of "broadband."

Wired notes ISP reaction to Google's expansion has typically lagged behind. A cynic might suggest they move to match Google's advances with their own, and only once they feel threatened.

The Register outright says so.

Google hasn't said exactly when Fiber is expected to come online in the new cities, but it did point to other potential future locations. Phoenix, Portland, Salt Lake City, San Antonio and San Jose are all on the list.